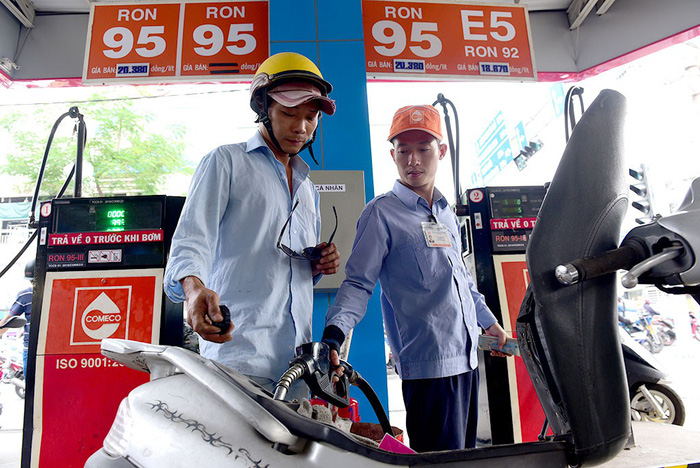 Vietnam’s Ministry of Industry and Trade has shown support for a proposal by a local fuel wholesaler to replace the consumer favorite A95 gasoline with the ethanol-mixed E5RON95, in a bid to boost consumption for the unwelcome biofuel.

The Vietnamese government mandated the sale of the ethanol-based E5 fuel in lieu of A92 petrol, the country’s most popular fuel, from the beginning of this year, but the biofuel has been received with little more than a halfhearted embrace by local consumers and retailers.

For A92 and A95 petrol, the numbers represent the octane rating, which indicates the antiknock properties of a fuel. E5RON92 and E5RON95 are blended from five percent of ethanol and 95 percent of A92 or A95 gasoline, respectively.

In Ho Chi Minh City, most filling stations dedicate a majority of their pumps to selling A95, despite the price disparity.

“The sale of E5 has not reached the expected level due to the mixed reception of local consumers,” Tran Ngoc Nam, deputy director of Vietnam National Petroleum Group (Petrolimex), was quoted by the Ministry of Industry and Trade’s portal as saying.

With most consumers willing to pay higher to refill their vehicles with A95 petrol, Tran Minh Ha, deputy general director of local fuel wholesaler Saigon Petro, has proposed ceasing the sale of this popular product, leaving only two choices for customers, E5RON92 or E5RON95.

Speaking at a meeting with the Ministry of Industry and Trade, Ha also suggested making E5 price much cheaper than A95 to attract consumers, particularly taxi drivers.

The idea was supported by the ministry and many other businesses attending the meeting, according to Deputy Minister of Industry and Trade Do Thang Hai.

Hai underlined that the proposal was merely a suggestion by a fuel firm, and no official plan or roadmap has been developed yet to realize it.

Supporters of E5 petrol say that only biofuel should be allowed for sale and consumption in Vietnam to protect the environment.

Phan Thi Viet Thu, deputy chairwoman of the Ho Chi Minh City Association for Consumer Protection, said that the government has the rights to do anything to protect the environment without affecting the interests of local citizens.

Thu showed her support for the idea of making biofuel the only available petrol in Vietnam, adding that this does not necessarily mean people will be stripped of the right to choose what fuel to use.

“One should not be supported if their choice of fuel can affect the environment, the community, and the society,” she explained.

Echoing Thu’s view, Duong Van Phi, deputy director of the Ho Chi Minh City branch of Petrolimex, said that many countries in the world have even circulated E10RON95 gasoline, or RON95 petrol blended with ten percent of ethanol, so it is normal for Vietnam to encourage the use of E5RON95.

However, many consumers interviewed by Tuoi Tre (Youth) newspaper said they do not want to stop using A95 petrol.

Nguyen Tien Thoa, former director of the price management department under the Ministry of Finance, also believed that it is impossible to completely ‘kill off’ A95 gasoline in Vietnam.

Thoa explained that Vietnam may fail to ensure supply for E5 gasoline if it becomes the solely available petrol, considering that there is currently only one domestic supplier of ethanol.

“The government also needs to spend more efforts to improve consumers’ reception over biofuel, as well as making its price more attractive,” he added.