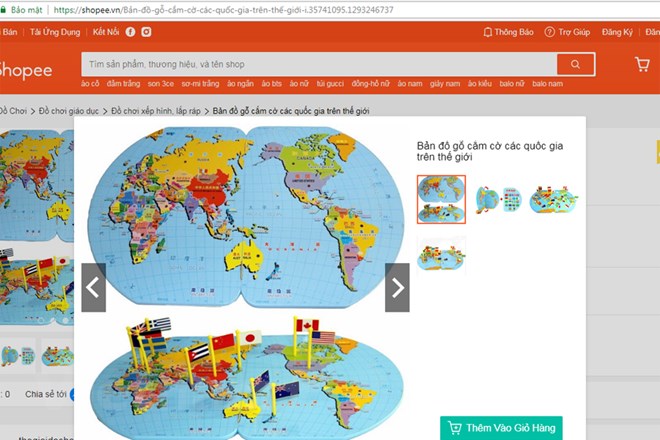 Shopee, an e-commerce site originating in Singapore, has removed from its Vietnamese platform ‘educational toys’ sold by a third-party seller featuring the imaginary ‘nine-dash line’ that China uses to illegally claim sovereignty over most of the East Vietnam Sea.

The site has also recalled the products and refunded buyers, a Shopee representative said on Friday.

“Three products under the same item code and ten similar toys have been sold through our platform,” the representative said.

“Our employees have gone door-to-door to recover the products.”

A package of the toy in question includes a world map and some plastic flags that children can attach to different areas on the map, teaching them to recognize the national flags and geographical locations of countries.

The map features the ‘nine-dash line’, a cow tongue-shaped demarcation invented by China that claims 90 percent of the 3.5-million-square-kilometer East Vietnam Sea as Chinese territory.

Vietnam has repeatedly denounced the illicit claim and rejected the authenticity of the imaginary line, which violates the country’s sovereignty at sea.

According to Nguyen Huu Tuan, head of the e-commerce watchdog under Vietnam’s Ministry of Industry and Trade, the toy maps are sold by Le Thi Nhieu, a resident in Hanoi.

She also sells the products through a personal website, which is currently inaccessible to the public.

Authorities has also raided Nhieu’s warehouse in Hanoi and confiscated 30 boxes and two sacks of imported products, most of which are children’s toys.

Only two specimens of the ‘nine-dash line’ toys were found among the stash.

Shopee, which operates as a customer-to-customer (C2C) marketplace, said it would increase monitoring over products offered for sale on the site to prevent future mishaps.

It also issued a notice to all current sellers asking them to remove products that may violate local laws.

Shopee Vietnam CEO Tran Tuan Anh said its C2C business model means sellers must take responsibly for the quality and information regarding products they sell on the platform.

Tuan said authorities are still working with the seller to see if she had proof of origin for the imported products as well as business registration for online sales.

Local operation of Shopee, which was launched in Vietnam in 2016, has been plagued by scandals including the sales of fake products and counterfeits.