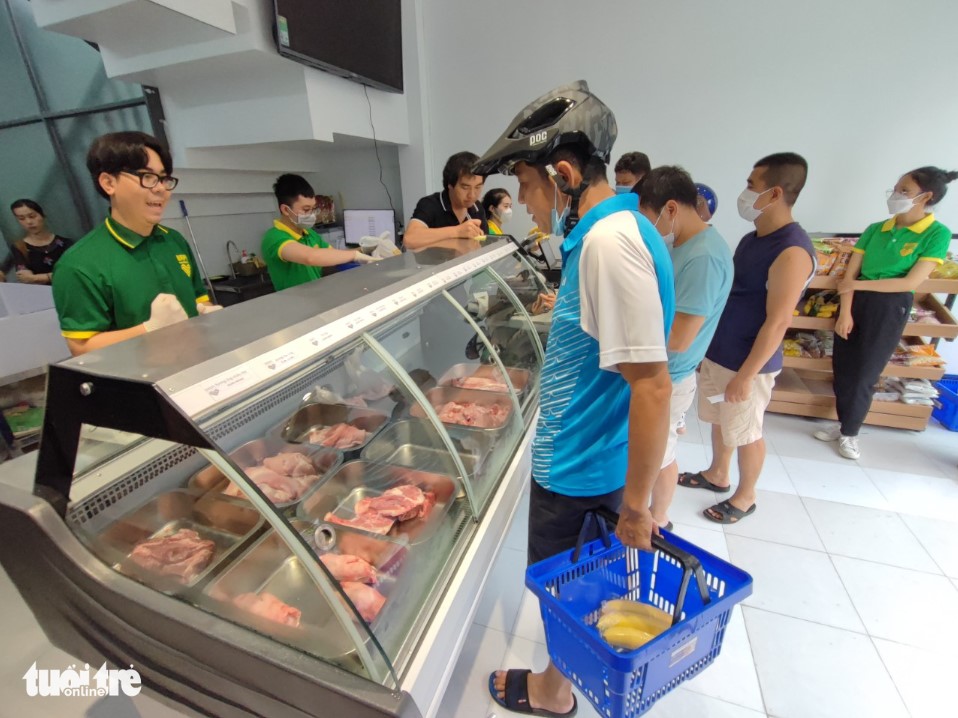 Vietnamese firm seeks a way out with pigs and bananas

Due to the ever-increasing demand for pork, the Vietnamese company plans to expand its chain of stores to about 1,000 in the near future.

According to Doan Nguyen Duc, chairman of Hoang Anh Gia Lai, 'pigs and bananas' are the salvation for their company as they have the potential for success after years of searching for a suitable business channel.

Many of them had to go back home without buying anything because the special meat sold out quickly.

Tran Ngoc Nga, a customer from District 7, Ho Chi Minh City could not buy a pork belly and had to purchase a pork shoulder instead.

When she learned about the pork from banana-fed pigs in the newspaper, she and her husband went to the store to buy it, Nga said.

"It sounds a bit strange to us, so we wanted to find out whether it is different from normal pork sold in the market," the woman explained.

"Besides, the price here is not too high and we also get gifts."

According to some employees of the store, they had to stock more pork in the afternoon, but the pork was not enough to meet the demand.

Sometimes they suspended taking online orders because they were 'overwhelmed.'

Some types of pork, such as spare ribs, pork belly, and pork collar, sold out quickly. Some customers even ordered these cuts the day before.

"To meet the increasing demand for pork, our store intends to stock a larger number of pigs instead of two pigs per day as before," the employees said.

In the first week after opening, Bapi Food will give bananas, bags, and soccer T-shirts of Hoang Anh Gia Lai Club to its customers.

At the opening ceremony of the Bapi Food store on Saturday evening, where pork from banana-eating pigs was offered for the first time, chairman Duc spoke about the path that led the company to the turning point.

His company exports hundreds of thousands of tonnes of qualified bananas every year, while the bananas that did not meet the standards were used as feed for pigs and chickens, Duc said.

This has proved to be a great advantage that will help livestock farming boom in the near future, he claimed.

Duc added that thanks to 'pigs eating bananas' and 'chickens eating bananas,' his group has been rescued from the debt crisis and turned a new chapter for the company.

His company cultivated 80,000 hectares of rubber trees in Laos and Cambodia and invested $2 billion.

When the firm invested in rubber trees, the market price of rubber latex was over $5,000 per tonne.

Hoang Anh Gia Lai was on the verge of bankruptcy because of the price drop.

"In the past two years, Hoang Anh Gia Lai has been fortunate to discover what is called 'one tree - one animal,' that is, planting banana trees and raising pigs under the circular economy model," said Duc.

The circular economy is a production and consumption model in which existing materials and products are shared, leased, reused, repaired, renovated, and recycled for as long as possible.

In this way, the life cycle of products is extended, according to the definition on the European Parliament's website.

"Pigs eat disqualified bananas and their waste can be processed into organic fertilizer for banana plantations," Duc said.

"Despite our current debts, this is no longer a problem."

The Hoang Anh Gia Lai executive is confident that his company has opened a new business chapter because the return on investment in the agricultural industry is not small at all.

Currently, the company is in the process of completing nine pig farms to raise more than 27,000 female pigs and 600,000 pigs for feeding annually.

There will be 1,000 stores selling pork from banana-eating pigs

In its outlook for 2023, Hoang Anh Gia Lai plans to supply the market with 20 million chickens and one million pigs raised on bananas.

The firm plans to expand its Bapi Food brand - 'pigs eating bananas' - in the future with a chain of around 1,000 stores, 80 percent of which will be franchised.