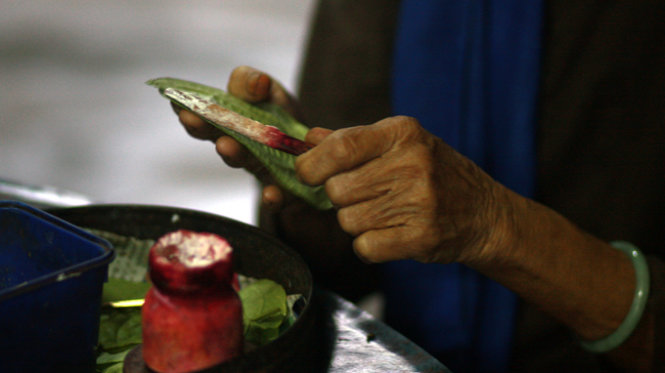 Some of our most cherished discoveries when living abroad spring up when we least expect them, in the oddest locations, so, whatever you do, don’t take your eyes off the ball – even for a second.

Thanks to a storied history and diversity, Vietnam is a treasure chest of cultural goodies that could easily escape detection, a brightly colored mosaic in a world of boring, plain tiles.

I found one piece of classic Vietnamese culture nailed to a tree of all places, right under my nose yet where I’d least expect it.

I often hang out at Bike Dude’s station, which is also his office, dominated by a big tree that throws off a lot of shade. We shoot the breeze (that is, he shoots the breeze while I try), do stretching exercises, ogle passers-by, and have a giggle.

He has implements and tools, greasy rags, rusty motorbike parts, cleaning implements for his rig, plus random props and memorabilia stashed all around the tree. In addition to being his office, that tree is his repair shop and a place to grab a nap after lunch.

At first glance, Bike Dude is a bit of an imposing figure, tall and muscular, decked out in full military regalia boasting a camouflage uniform, a matching helmet, and combat boots. The only things missing are a row of medals across his chest and a pistol in his belt.

Everybody knows him, and, I suspect, is aware that he has every street, alley, pot hole, and short cut indelibly etched in his memory. Plus he has a few driving tricks up his sleeve, enabling him to skirt obstacles and ensure passengers and cargo arrive safely at the desired destination.

He may be ‘only’ a taxi driver in some people’s eyes, but he commands respect. He’s a professional – experienced, reliable, and trustworthy. I think he can even see around corners because any potential danger or risk that arises is quickly quelled.

The truly indisputable proof of his prowess lies in how, without exception, he grasps my hokey directions and horrid pronunciation. Anyone who can decipher my gibberish is very sharp, let me tell you.

He never gives me that empty stare we foreigners have all received at one time or another, when we’re convinced that what we’re saying is clear but the listener is left in the dark.

Me: “Phải!” (right, as in please turn right, but when pronounced incorrectly it can mean “Yea” as in yes)

Me: “Trai! (left) No, wait, thang tien (straight ahead)!” As the panic mounts, I always throw in some English, which makes things worse.

Bike Dude: “OK” (thinking “My goodness, what a klutz this guy is.”)

We advance, with Bike Dude shrugging off the confusion and forging ahead, often intuitively, in full control of the situation. Oh well, at least one of us always knows where we’re going, and half the time it isn’t me.

I don’t actually call him Bike Dude, rather ‘Chuyen Gia,’ (Professional), to underline my respect.

Whilst hanging out in his office in Da Lat, I noticed some interesting objects mounted on the tree – a couple of areca nuts (‘trau’ in Vietnamese, which come from the plant of the areca palm ‘cau’), a little bag of pink-stained crushed slaked lime (‘voi’), a couple of dried up old leaves, a few rusty old washers, screws, nails, chain links, and, naturally, some wooden toothpicks, critical for plucking out unsightly morsels after lunch.

Forget all that hardware – the story, as it turned out, is in the nuts, leaves, and slaked lime, and, to my delight, the tale rekindled an important lesson about life abroad that had faded from my mind.

While surveying the tree and contents, my mind suddenly snapped, curiosity piqued, and I took photos of the objects on the tree. I carried them around for weeks, poking around in my network of friends to learn what the objects symbolized, and, the more I asked, the more variations on one traditional theme surfaced.

The single common thread in all versions is the nuts, leaves, and slaked lime (I’d never heard of it, looked it up, and discovered it’s calcium hydroxide, whatever that is), referring to a classic Vietnamese fairy tale called ‘Su tich Trau Cau’ (The Legend of the Betel and Areca). The tale chronicles the sad fate of identical twin brothers and the wife of one of them, all three of whom lived together in a cute little house.

One day the unmarried twin arrived home before his brother and his brother’s wife confused him with his sibling, offering him a warm, tight hug!

Anyone would be the victim of such an innocent oversight since the twins were identical. Nonetheless, the unmarried brother felt very sad because the incident ruined their domestic happiness, and he left the home carrying a heavy load of guilt on his conscience.

That single brother traveled on foot for many days, eventually fatigued, then dying by a river, and was transformed into limestone (I warned you this is a fairy tale). The married brother was concerned about the disappearance, so he went on the hunt, eventually tired from the journey, sat down near that large limestone rock, and also died. In time, a strange tree grew in the place where the married brother had died.

Sure enough, the wife took off looking for the brothers and she in turn died by the river, morphing into a small plant with heart-shaped leaves which wound itself around the tree trunk.

Out of the blue, the king happened to pass along and learned of the story from local villagers, then sat down and chewed a betel leaf together with a hunk of an areca nut spiked with slaked lime, getting a nice little drug-like high that is associated with that combination. The king spat the juice of the nut onto the large limestone causing that part of it to turn red.

This tale takes place before the days of dentists, toothbrushes, and tooth paste, so it was fortunate people discovered that chewing the betel leaf with the areca nut dabbed with some dampened slaked lime reddened their lips, strengthened their teeth, and, joy of all joys, provided a little buzz similar to caffeine or dope.

The elder generation in this part of the world, women in particular, still chew on wrapped betel leaves with pieces of betel nuts and slaked lime inside (‘nhai trau’ – literally ‘chew betel nuts’), rendering their teeth bright red, and that little buzz paints the big smile we usually see on their faces.

Over time, the leaf, nut, and lime became an inseparable trio, a unit, symbolizing a warm welcome into a home and an initial offering from bridegroom to the bride’s family, believed to assure a loving, warm future for the betrothed.

Areca nuts are always offered in even-numbered amounts with 60 being the most popular quantity, one per year that the new marriage is predicted to last.

The moral of that fairy tale is elusive – at least to me: an innocent mistake made by the wife led to several sad events – hardly an earth-shattering moral lesson, but the story does give meaning to the betel nut’s importance in Vietnamese culture.

I also remain in the dark as to why Mr. Chuyen Gia hung the symbols of the tale in his office, but I dare not ask in case it leads to an unpleasant personal incident that he’d rather not discuss.

My own takeaway is less about the story itself and more about other cultural gems that may lie under our noses undetected. If that children’s tale is behind an innocent display of fruit and ornaments on a taxi driver’s tree, so easy to overlook, what other tales of Vietnam lie just beyond our grasp?

And that is the real lesson I was taught long ago, which had slipped my mind, then returned to the forefront while learning ‘Su tich Trau Cau.’

The deeper we dig, the more we discover.

Turn that proverbial stone over every chance you get, you never know what lies beneath.