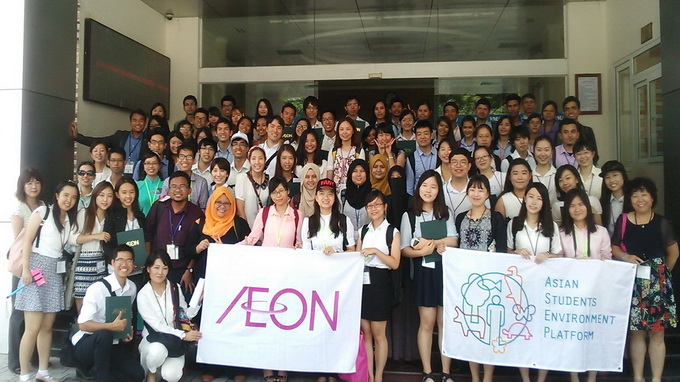 Global warming and the preservation of biodiversity will be the topics of focus at this year’s Asian Students Environment Platform (ASEP 2016), set to begin next month in three major Japanese cities.

Held annually since 2012 by the Japan–based AEON Environmental Foundation, ASEP aims to educate a new generation of Asian students on ongoing environmental issues.

This year’s ASEP, jointly held by the foundation and Japan’s Waseda University, will take place from August 3 to 8 in the three Japanese cities of Tokyo, Chiba, and Hokkaido, where 84 student delegates from seven Asian countries will gather to discuss critical global environmental issues.

Run under the theme ‘Biodiversity and Wisdom,’ this year’s platform focuses on promoting and exchanging global perspectives on biodiversity while learning about the differences between the natural environment, history, cultures, and senses of value of the participating countries.

The platform aims at developing students with a global perspective who would be active in environmental fields.

According to the program’s agenda, the delegates will engage in activities such as topic discussions, tree planting, and meeting with senior Japanese officials.

Representing Vietnam at ASEP 2016 are 12 undergraduates from Vietnam National University-Hanoi, who told Tuoi Tre (Youth) newspaper about their eagerness to take part in the regional platform.

Bui Tuan Anh, who majors in environmental studies at the university, praised Japan for its effective environmental protection policies and said he could not wait to learn from their experience and apply the knowledge in Vietnam.

“Environmental protection is a serious issue that has not received the attention it deserves in Vietnam,” Anh said. “In addition, I believe I will be exposed to a lot of interesting perspectives on environmental issues from the international delegates.”

Anh confessed that what he hoped for most out of the platform is a solution to the recent man-made environmental marine crisis in Vietnam.

Nguyen Xuan Duc, who studies computer science, attributed her decision to participate in the platform to the fact that every youth should pay attention to ongoing environmental problems as nobody is spared their impacts.

Dr. Vo Thanh Son, a research scientist at the Center for Natural Resources and Environmental Studies (CRES) under Vietnam National University – Hanoi, said that ASEP is a valuable opportunity for Vietnamese students to exchange perspectives with countries with similar socioeconomic conditions, such as Indonesia and Cambodia, while also learning from the experience of well developed countries like Japan.