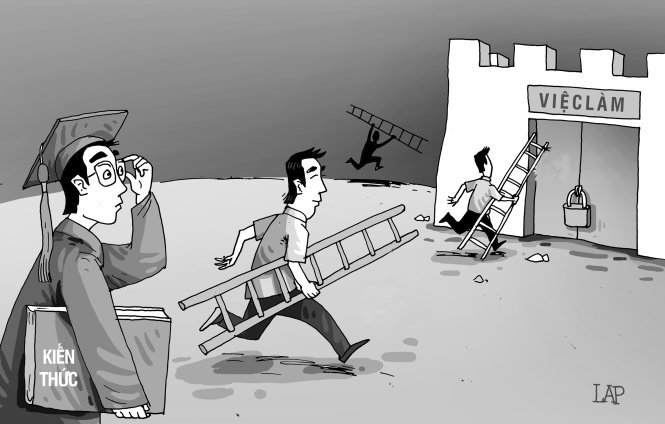 For most of Vietnam’s fresh graduates, life after their university graduation is much tougher than those four years of being a student.

It has been a growing and worrying trend in Vietnam over the last few years that fresh graduates, even those with a master’s degree, fail to land a suitable job and have to accept working in fields that have nothing to do with the majors in which they are professionally trained.

It is not uncommon to see people with university degrees do laborious jobs, become shopkeepers or even xe om (motorbike taxi) drivers, where no qualifications are needed.

There are now some 100,000 university graduates doing unskilled jobs, according to the military-run Quan Doi Nhan Dan (People’s Army) newspaper.

By the end of this year, Vietnam is expected to see yet another 200,000 young people become unemployed after graduation, Radio the Voice of Vietnam reported in mid-February.

Dao Quang Vinh, head of the labor science institute under the Ministry of Labor, War Invalids and Social Affairs, confirmed the gloomy outlook with the Hanoi-based radio station.

Experts have pointed the finger at the training quality of local universities, with impractical and outdated curricula, and suggested that the number of graduates is bigger than the labor market demand.

The issue has caught the media’s attention again after more and more have chosen to become GrabBike drivers, or ‘hi-tech’ xe om, as a temporary solution to their unemployment.

T.D.M., who graduated from the Ho Chi Minh City University of Law in 2014, is now a full-time GrabBike driver.

The reason, M. said, is simple: he makes more money from the unskilled job than a position at a law office, and more importantly, the cash comes straight into his pocket on a daily basis.

“You don’t have to wait until the monthly salary day,” he told Thanh Nien (Young People) newspaper in August.

M. said he is happy working as a xe om driver, with ‘fresh cash’ earned every day that helps him support his parents back home in the central province of Quang Ngai.

The biggest problem, however, is that he has to hide his real job from the family.

“Never do I dare to tell them that I am a xe om,” he said. “My parents still believe I am working at a law office.”

For many families in rural areas, having a child complete a college degree in Ho Chi Minh City or Hanoi is a huge source of pride.

“My parents would definitely be unable to accept the truth,” M. said.

According to experts, one of the main reasons for the glut of university graduates unable to find a suitable position is that what they are trained is of little use in the actual job market.

“Many business leaders have pointed out that the curricula of many universities in Vietnam are problematic and outdated,” Prof. Truong Nguyen Thanh, vice chancellor of Hoa Sen University in Ho Chi Minh City, told Thanh Nien.

“While technology is changing rapidly – we will have a new piece of tech every six months or a year – what is taught in the four-year university program [in Vietnam] remains unchanged for decades.”

Prof. Thanh added that in the U.S., there are also graduates who have to do jobs different from their majors. “But the jobs are of the ‘same level’ as their qualifications,” he noted.

“For example, an IT graduate can work as a PC repairman, but not jobs that have nothing in common with his trained skills.”

In an opinion piece on Radio the Voice of Vietnam in July, writer Vu Hanh put the blame on the training program.

It is not really difficult to enter college these days in Vietnam.

Some private universities are willing to admit students with average entrance scores or lower, so long as they meet their enrolment targets every new academic year.

These students will easily graduate, but as “a weak human resource base” that fails to meet the high demand of recruiters, Hanh wrote.

“There are job fairs with thousands of vacancies available but the recruiters fail to find any suitable candidates,” she said.

“Even when an employer decides to recruit fresh graduates, that company will have to waste time on ‘retraining’ these candidates so they can really start doing their job.”

COVID-19 outbreaks in those places have been put under control