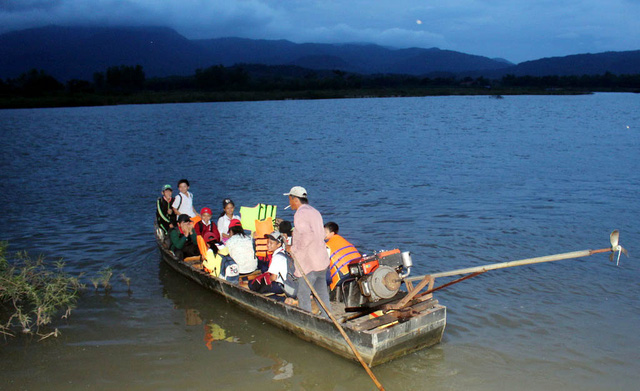 It remains a daily sight in rural areas of Vietnam to see students cross rivers to get to school.

The river itself is 50m wide and 3m deep in some places with no bridges in sight.

As the road trip around the riverbank is up to 25km, many students rely on the more direct boat rides, however, the boat owner has no legal permission from the authorities to take passengers across the river.

Worryingly, minimum safety requirements are also not met. In most cases, there are only a handful of lifejackets available for the 15-20 passengers the boat usually takes.

While many of her peers are escorted home by their parents, 12th grader Le Thi Bich Ngoc and her classmates must cycle to the riverbank, park their bicycles nearby and then take the ‘boat’ home.

Ngoc has two bicycles, one on each side of the river, to complete her daily cycle–boat-cycle school journey.

She began travelling to school in this way in grade 6.

Before the boat began operating, students like her would swim across the chest-deep river carrying extra clothes.

Another 12th grader, Nguyen Quoc Dai, says he leaves home as early as 5:00 am every day to be on time for class.

“It’s less terrible in the dry season,” he said, “but in the rainy season, the water level rises to a scary height.”

When it rains hard, or in times of floodplain regulation, he would be forced to skip class or ask his parents to ride the 15km detour.

Considering the size and depth of the river, inadequate safety equipment on the boat has raised eyebrows.

According to one boat captain, Chau Minh Vuong, the boat operator acknowledged the dangers of larger groups, but says that is “the way things are,” or students will be late for class waiting their turn.

He also explained that the trips become even more treacherous after school when it gets dark very quickly.

Boat trips in the area are community-driven, springing up out of the needs of local people. To use the service, boat passengers pay an annual fee equal to US$9.

One school principal in the region, Vo Van Nho, says 60 students enrolled in his school live on the other side of the Kon River.

Aware of the potential hazards, he encourages parents to seek accommodation closer to school for their children during the rainy season, from October to December.

Why not choose a new school?

It is all about the number of students.

According to Chau Thi Phuong Trang, vice-chairman of the People’s Committee of Tay Giang Commune, there are roughly 150 middle and high school students living on the other side of the river, in Huu Giang Village.

She says this number is insufficient for a new school to be considered.

Therefore, the authorities have taken steps to inspect and monitor the activities of the boat owner, ensuring safety standards and obedience to domestic waterway traffic laws.

They have also provided lifebuoys to those using the boat.

However, according to the authorities, despite the owner and users still not making enough effort to comply with regulations, because the demand remains, the boat continues to operate.

Why not build a bridge?

This is about funding.

According to the deputy director of the Department of Transport in Binh Dinh Province, Tran Thanh Dung, the Ministry of Transport approved an updated list of bridges in 2014 as part of the Bridge Construction Program for Ethnic Minorities in 2014-20.

Pursuant to this approval, Binh Dinh is entitled to US$5 million in funding for the construction of 23 bridges.

Unfortunately, the estimate for the construction of the Tay Giang Bridge on the Kon River alone was $4 million.

The reinforced concrete bridge would have needed to be 500m long and 5m wide, and included a pedestrian railing.

“It’s not feasible. The river is too large and the geographical conditions here are unfavorable,” said Dung about the decision to scrap the project.

On several occasions, police have halted the operations of the boat owner, who fails to comply with regulations, but the dangerous boat trips seem here to stay.

The Department of Transport in Binh Dinh has sought extra funding from the Ministry of Transport for the construction of the Tay Giang Bridge, but the proposal has still not been seriously considered by the relevant authorities.