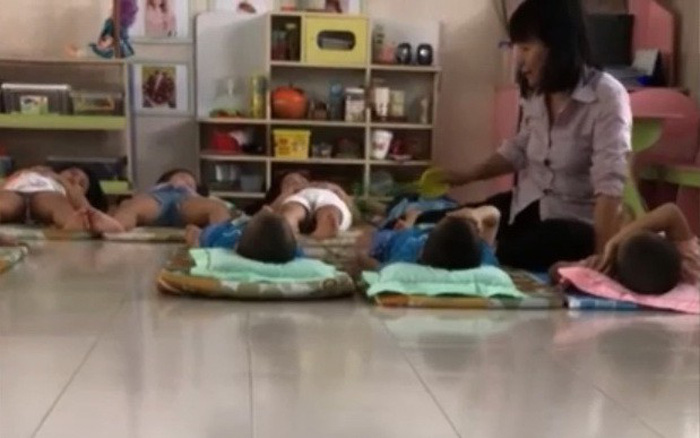 A teacher at a public kindergarten in Ho Chi Minh City was suspended from work after a concerned parent sent a video clip of her physically and verbally abusing a student for not taking a nap.

During her suspension, which started on Wednesday, the teacher will be working with the kindergarten’s janitorial and kitchen staff, Vo Thi Thanh Loan, the headmaster of April 30 Kindergarten, where the event took place, told Tuoi Tre (Youth) newspaper.

According to Loan, a clip was sent to the school board last month showing one of their teachers, Tran Bich Ngoc, hitting a student with a stick for not sleeping during a midday nap.

The video also shows Ngoc asking the child “are you a human or an animal? If you’re a human, why don’t you listen to me?”

Though the incident took place during the last school year, the school board was only recently made aware of the situation when the parent who secretly filmed the clip submitted the complaint.

“We called a meeting on April 6, during which we reached the decision to suspend Ngoc,” she said.

“This is only a temporary measure. We are taking steps to handle the case in accordance with laws on public employees.”

At a meeting between the school board and the parents of the beaten student on Tuesday, the parents said they did not wish to press charges against Ngoc but demanded that the school take more responsibility for its teachers.

Other parents describe Ngoc as an experienced and kind-hearted teacher who loves her students, though she can be quiet hot-headed at times.

“If you have a chance to see Ngoc take care of her students, you will understand how devoted she is to the job,” one parent told Tuoi Tre.

“Out of context, it may sound unacceptable for a teacher to suggest her student was an animal, but in fact Ngoc has a habit of giving animal nicknames such as squirrel, hedgehog, rabbit and kitty to her students,” another parent explained after watching Ngoc’s clip.

The suspected cases include 151 test-takers and 15 staff members