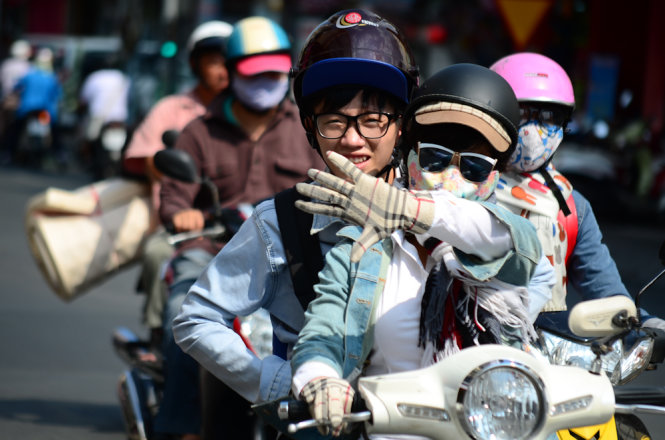 Though Ho Chi Minh City has seen occasional drizzles in the past few days as the rainy season approaches, residents still sweat profusely under the stifling heat and struggle to relieve its undesirable effects.

According to the National Center for Hydro-Meteorological Forecasting, despite occasional showers in the afternoons and evenings, the city will see lingering heat with temperatures peaking at 36 degrees Celsius during this week.

The heat has persisted for the past two months or so, leaving residents and tourists suffering terribly and forcing them to try every way they can to escape it.

Few women go out at midday without jackets, gloves or masks. Many men do the same.

Many choose to go to swimming pools or water parks to pamper themselves in the cool, refreshing water.

The recent six-day public holiday saw crowds thronging to beaches in such coastal cities as Vung Tau, located some 100 kilometers from Ho Chi Minh City; and the central city of Da Nang.

The holiday lasted from April 28 to May 3, with Reunification Day (April 30), the death anniversary of the Hung Kings (April 28), and Labor Day being part of it.

Many buy fruits or vegetables with refreshing properties such as watermelons, oranges, lemons, dragon fruits and coconuts to eat or make smoothies with.

The soaring demand has sent these products’ prices up compared to normal times.

Workers are seen categorizing lemons before taking them to the market in Ho Chi Minh City. Photo: Tuoi Tre

Peddlers or stand owners of refreshments including iced coconut and lemon juice, or liquid extracts thought to possess cooling and healing properties have also benefited from the sultry weather, as customers queue up to buy them.

Dao Van Thinh, the owner of a coconut shop in Tan Binh District, told Tuoi Tre (Youth) newspaper his sales have risen two- or three-fold in the past few weeks despite the mounting prices.

“I generally sell between 80 or 90 coconuts a day, but these days there’re times when I sell nearly 300,” he added.

Families turn on fans or air-conditioners during most of the day, particularly at noon or around bedtime to relieve irritability.

Electrical appliance stores have also reported growing sales in the past few weeks.

A towel is placed over a baby girl to shield her from the sun. Photo: Tuoi Tre

Groups of young people seek relief from the intolerable heat under the canopy at a Ho Chi Minh City park. Photo: Tuoi Tre

A man in Binh Thanh District has his air conditioner fixed after it has been overworked during the past few weeks. Photo: Tuoi Tre

Workers are seen toiling under the scorching sun at a construction site in District 2. Photo: Tuoi Tre

A construction worker puts on a mask to shun the sun. Photo: Tuoi Tre

Some foreigners don scarves and carry umbrellas while walking under the sun. Photo: Tuoi Tre