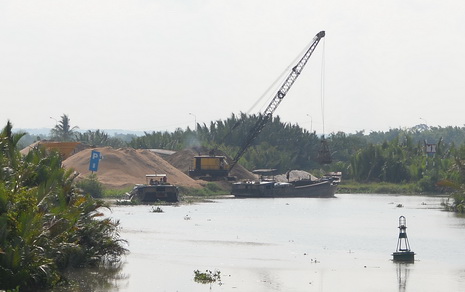 Locals in a Ho Chi Minh City district are fighting a desperate battle against illegal sand miners, as the act has triggered worrying land subsidence and caused  hectares of land to “evaporate.”

Many residents in District 9’s Long Phuoc Ward have been plunged into untold sufferings as they have lost a total of over 42 hectares of land in the past few years.

The culprit are sand thieves who have blatantly operated in a section of the Dong Nai River, one of the southern region’s largest, which snakes itself through the ward.

Q., a “retired” illegal sand miner in the Dong Nai River, told Tuoi Tre (Youth) Newspaper that a hired hand in the “trade” earns around VND1 million (US$46) each day.

“They steal over 100 cubic meters of sand every day, not to mention the sludge layer on the river surface that is discarded. The expanses which were land before have now become one with the river,” Q. said.

Sampans are maneuvered around every 45 minutes to suck huge amounts of sand from the riverbed and then move the loads into waiting boats or barges.

The boats and barges hail from neighboring provinces including Binh Duong, Long An and Dong Nai.

Huge loads of sand are pumped from a smaller boat into a bigger one right on the river. Photo: Tuoi Tre.

Thieves have a boatful of sand around 40 minutes later and waste no time in selling them to the owner of a waiting larger boat. Photo: Tuoi Tre.

Dozens of sampans and large boats riddle an area which used to be locals’ land. Photo: Tuoi Tre.

Rampant land subsidence has left many local houses built along the river seriously ravaged, with some giving way entirely.            A number of residents have silently reported the violations to local authorities to little avail, as the thieves retreat and lie low in times of tightened inspections and spring back to life only some days later.

“The ferocious thieves are not hesitant about victimizing  whistleblowers, so there’s really not much we can do except seeing our land plots sliding down into the river,” N.V.Q, a local, lamented.

H., another resident, who watches over plots for several land owners in HCMC, said the owners have no choice but to resign themselves to their land loss.

H., a resident, points at his “evaporated” land plot on a map. Photo: Tuoi Tre.

Nguyen Trung Thu, one of such land owners, presented her land use right certificate and wailed over losing 1,000 square meters of land to the thieves.

Many others do not fare any better than Thu, as their plots measuring between 700 to 2,000 square meters have also vanished into thin air.

As the affected river section winds its ways through several locales, all the sand exploiters do is fleeing to other wards during raids.

According to Senior Lieutenant Colonel Nguyen Hong Ninh, deputy head of the city’s Waterway Traffic Police Office, most of the time thefts are somehow informed of police raids, allowing them ample time to flee or purposefully sink their boats to avoid being caught red-handed.