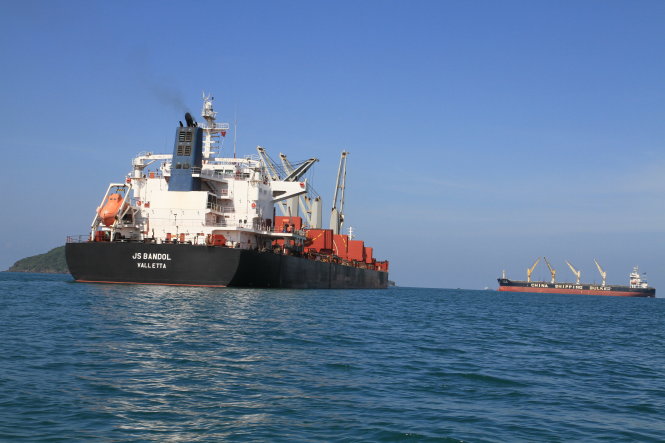 Tracing Vietnamese ‘sand drain’ to Singapore – P1: Where do the ships go?

During the first two months of 2017, a number of ships flying foreign flags frequented several coastal areas in Vietnam, leaving with a hefty haul of newly dredged sand.

Two Tuoi Tre (Youth) newspaper journalists tracked the ships and discovered an ongoing megaproject in Singapore fueled by a vast amount of imported sand and dependant on Vietnam as a prime location to exploit the powerful resource.

This is the first part in a Tuoi Tre investigative series on Vietnam’s ‘sand drain’ to the city-state.

Four separate Vietnamese exporters hold contracts to transport the sand, each of whom admitted to Tuoi Tre that they only know the vessels were bound for Singapore, though none had any idea of the exact destination.

According to sources from Singapore and data gathered from the live ship-tracking map MarineTraffic, Tuoi Tre discovered that the ships were carrying the Vietnamese sand to Tekong Island and an area known as Changi Villa, both located adjacent to Singapore’s Changi International Airport.

In late February, the Tuoi Tre correspondents spotted a bulk carrier named Peterborough, which had been to Phu Quoc Island off the southern Vietnamese province of Kien Giang one week prior, docking near Changi.

The Peterborough was docking near the Yangtze Harmony, another carrier which appeared to be unloading sand dredged from Vietnam onto Tekong Island.

According to the Tuoi Tre investigation, these are not isolated cases and a number of foreign ships have been transporting sand from Vietnam to Singapore since the beginning of 2017.

Among them are five vessels: the RHL Monica, the JS Bandol, the Sheng Wang Hai, the Great Rainbow, and the Jin Sui, originating from Liberia, Malta, Hong Kong, and mainland China.

These ships were hired by Singaporean Hua Kai Engineering to transport sand bought under a contract with a local company on Phu Quoc Island to the city-state before transferring the resource onto smaller barges in an area called Changi Villa Tanjung Pengelih, situated between Tekong Island and Changi Airport.

Meanwhile, in waters off the south-central Vietnamese province of Khanh Hoa, ten additional foreign ships were also preparing to transport sand to Singapore. Nine of them were hired by Singapore’s Le Tong Resources Co., and one by TNS Resources.

A sand-pumping boat is seen off Khanh Hoa.

Even during the observance of Vietnam’s Lunar New Year in late January, Tuoi Tre still spotted five ships – the Silk Road 03, the Jin Xiang, the Great Link, the Giaovanni Topic, and the Dubai Galactic – carrying sand off the coast of Phu Quoc.

According to data gathered by Tuoi Tre, 40 foreign ships transported a total of 905,000 cubic meters of sand from Vietnam to Singapore from January 1 to February 23 despite a 2009 ban on sand exporting in Vietnam.

In 2013, the Ministry of Construction allowed some businesses to export saline sand from sea and river dredging projects, a decision which seems to have paved the way for the resource to be transported in large volumes to Singapore.

According to one Singaporean sand importer, the city-state has been working on a US$6.5 billion land reclamation project meant to expand the area of Tekong Island from 657 hectares to 3,310 hectares for the last decade.

The company also revealed that it has been importing sand from Vietnam and several other countries to serve the Tekong project since 2009.

However, accessing the construction site is not easy and no boat service operates a route to the project.

The Tuoi Tre reporters convinced the captain of a small tourist boat to travel off his normal route, approaching as near Tekong as possible. He agreed for a fee of S$150 ($106).

Thirty minutes into the journey, the reporters spotted three massive vessels docking near the island and a gigantic excavator transferring sand from its cargo to barges waiting below.

One of the ships was the Yangtze Harmony, the same vessel Tuoi Tre spotted near Phu Quoc just days prior.

The reporters observed that the construction site on Tekong Island was surrounded by a concrete dyke with sand being unloaded inside the structure.

The following day the Tuoi Tre reporters had a local driver take them by road to the Singapore General Aviation Park adjacent to Changi Airport.

At the scene, the reporters saw a number of sand dunes, each approximately ten meters high, along the Changi Coast, Tanah Merah Coast, and Aviation Park Streets, and hundreds of trucks loaded with sand traveling to and from the site.

A security guard spotted the reporters, posing as tourists, and barred them from entering the construction site.

Before leaving, Tuoi Tre managed to peek through the fence and saw a number of trucks, bulldozers and excavators busily at work.