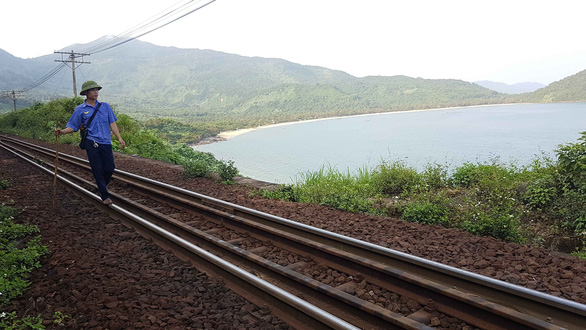 The life of track patrolmen on Vietnam’s deadliest railroad

The railway running over the Hai Van mountain pass in central Vietnam was first built during the French colonial period of Vietnam.

Though trains begin rumbling down the track in the morning, it is in the dead of night that the real action happens on this stretch of railway.

From dusk till dawn the patrolmen tasked with ensuring the safety of the track work to solve any issues before the first train roars through mountain pass in the morning.

It’s a thankless job filled with hours of working in the dark for meager pay, but, nevertheless, it’s a job which must be done.

Sections of winding railway run alongside the sea and disaster is imminent the moment a careless mistake is made.

Due to such rough terrain, trains passing through the pass often take up to an hour to complete the stretch.

In order to shed light upon the selfless service, Tuoi Tre (Youth) newspaper reporters ventured deep into the humble world of Vietnam’s railway patrolmen to witness their dedication to keeping the country’s travelers out of harm’s way.

A night for two

As the last rays of sun settle behind the mountains in Da Nang, scores of lights illuminate the train tracks running through the Hai Van mountain pass.

Amidst the seemingly halted stillness, there was only the sound of patrolmen scrambling to maintain the tracks accompanies the light.  The sound of hammers clanging away at the railroad spikes had a rhythmic charm eerily fitting for the scene.

Tuan is a 32-year veteran of Vietnam Railways and has been stationed in the area for the past 12 years.

Needless to say, he is well-versed in virtually everything concerning the maintenance of the track he is responsible for.

Tuan would pass the hours hammering the tracks to analyze their status. A clang at one pitch means a screw needs tightening.  Another pitch might mean more serious maintenance is in order.

For small issues, railway patrollers like Tuan perform the maintenance work themselves.  For larger problems, a detailed report and request is immediately sent to higher units.

Tunnel 14 is notoriously long compared to its peers and the mold along is walls easily betrays the fact that it has been in operation for over a century.

Tuan shared that the tunnel’s age makes it a real nightmare for rookies, and that its damp environment decays the rail’s equipment very quickly, meaning it needs more maintenance than the rest of the track.

“There is no other way but to replace the parts more frequently. It’s a miracle the tunnel is still standing. The French really put a lot of thought into its construction,” Nga, the technician, exclaimed.

He revealed that small malfunctions like this can occur after just two or three trains pass through.

Though bigger flaws aren’t as common, patrolmen still need to be vigilant about potential problems.

Han has spent years memorizing every nook and cranny of the tunnel, but still admits that he often feels lonely while he’s on the job.

But still, he’s grown connected to the railroad and feels like something is missing whenever he takes time off.

Despite many attempts to improve its overall infrastructure, Vietnamese railroads are still drastically behind the times.

In the past few decades, derailed trains were the norm on the Hai Van mountain pass.

In order to handle the dilemma, a third rail was implanted on top of the conventional railway.

Thanks to the addition, rail deterioration came to a halt and accidents began occurring much less frequently.

According to the more veteran track patrollers, the current workload is a “thousands of times” lighter than in the past.

The rail quality at the time was mediocre at most, and patrollers occasionally found themselves face to face with wild animals.

Natural factors, such as soil erosion and flooding, are still a common threat and one of the railway’s greatest dangers.

There had been a case when ten separate areas eroded at the same time and the entire staff stationed along the Hai Van Pass were deployed to carry out the necessary repairs.

A life of hardship and solitude

In the area Nga patrols there is a small shrine dedicated to a patrolman named Hieu who died on the job in 2008.

Hieu had been working overtime and attempted to grab a moving train in order to make it to lunch quicker, but along the way his hand slipped and he fell to his death.

Each night, the workers on the railroad join for dinner at their respective booths.  One of the workers at the booth for tunnel 12 shared that he hoped to be transferred away so that he could start a family.

Others shared their insecurities about their love life, with most fearing they will not be married anytime soon.  And even if they do, most worry about the future.

For track patroller Huy, who is only able to send VND1 million (US$43.03) home to his wife each month, the future feels bleak.

“Both my wife and parents urge me to switch to a job where I can be at home more.  They’d be happier with anything, including raising pigs. But you know, despite all the disadvantages that come along with my profession, I cannot just quit,” Huy expressed.

Huy is not alone in his sentiments.

“Once you become intertwined in this line of work, quitting seems like a far-fetched idea,” Nga disclosed.