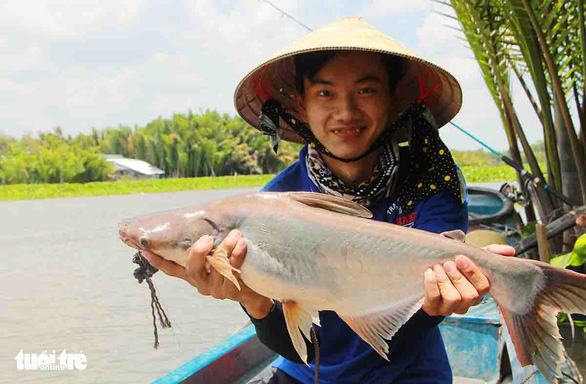 Tran Van Thoi is among those in Vietnam’s Mekong Delta who have mastered angling skills while making waves in otherwise serene waters.

One of the most bustling fishing grounds in the area is the former Vam Cong Ferry, which had been transporting people and vehicles of all kinds between Dong Thap and An Giang Provinces via the Hau (Back) River for nearly a century since its first run in the 1920s before a namesake bridge took its place and opened to traffic in May last year.

Since the ferry service, its ten-vessel fleet, and many of its staff were made redundant, the deep stretch of water has become a prime breeding ground frequented by seasoned anglers, many of whom had relied on the ferry crossings for a livelihood as xe om (motorbike taxi) drivers and vendors.

A xe om driver at the ferry, he used to dabble in fishing just to kill time while waiting for passengers for nearly 30 years before relying on the job altogether for a living.

Thoi revealed all anglers have their favorite fishing ground which they do not readily share with others.

“A group may cast the rod at the same stretch of water but only one goes home with a bucketful of fish, while others may end up empty-handed. These anglers are said to be born to kill fish but the key lies in insider knowledge of currents, where shoals of fish typically gather for food, and which bait goes best with each type,” he shared, adding another secret is patience.

The onset of rising and receding currents, which typically spark a feeding frenzy, leave the fish most vulnerable.

Though baits come in a wide array ranging from crickets, cockroaches, worms, banana slices, breadcrumbs to offal and roasted pork, each variety of fish normally has its own pick, Thoi noted.

Nguyen Van Ut, a 60-year-old Dong Thap resident, who ran a coffee shop near Vam Cong Ferry and has gone fishing at the ferry pier since its shutdown, earned his fellow anglers’ admiration for once reeling in a monstrous Green catfish weighing more than 10kg.

“The river monsters are extremely strong. I didn’t manage to pull it ashore until it got drained after a battle of more than half an hour,” Ut recalled.

Some anglers even come to cast rods near fish cages lining the Tien (Front) and Hau Rivers, with owners’ permission.

“Cage fishing is a boon. We usually end up with big catches, with many weighing up to 10kg, as fish tend to swim near the cages for the raised stock’s feed,” he explained.

One of Ut’s favorites, tom cang xanh (giant freshwater prawn), is particularly drawn to sea worms, which fetch exorbitant prices of around VND800,000 (US$34) per kilogram.

“We are thrilled, though the baits are sometimes worth more than the catches,” he said.

“Seasoned anglers can tell if the catches are big or small merely from how much the rod bounces or how heavy it is when reeling in,” Ut revealed, warning that Gray eel-catfish should be handled with great care as their spikes can cause serious injury.

Young people are also hooked on the hobby.

Among them, Vo Hien Luong, from Long My District in Hau Giang Province, has gained a reputation for his multiple catches weighing over 10kg each.

According to the man, in his early 30s, the 10-kilometer stretch of Cai Lon River meandering through the district and its neighbor, Vi Thuy, is home to large schools of fish, particularly ca vo (Black-spotted catfish) thanks to its myriad sections of various depths.

On one typical day, Luong rode his sampan along the river stretch near Cai Nhum Church in Long My Ward, the bank of which was already dotted with anglers.

Pulling the sampan over to a clear-water area, the man turned off the engine and quickly put baits mixed with fish feed on five rods.

“I attach two hooks to each rod. It only takes some minutes before the hungry fish get trapped,” Luong explained.

“It’s easier to handle small fish. With big fish, you shouldn’t rush, or the fish may jerk free off the hook and get off.”

He added he and other anglers had bumper harvests two months ago as shoals of fish migrated further into the river, for paddy fields were badly affected by water salinity, a recurrent problem in the area over recent years.

He also expressed sadness over dwindling catches in recent years due to lack of water and exacerbating depletion of fish stock, triggered by overfishing and failure to protect young populations of fish and promote their reproduction.