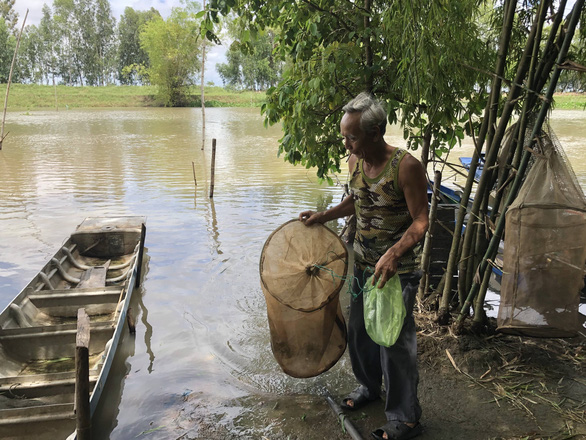 As the flood season in the Mekong Delta has come late due to impacts of climate change, local fishermen, especially needy people, are going through multiple difficulties as they cannot catch fish.

According to several fishermen who have been doing this job for many years, this year brings them the biggest hardship ever.

Tran Van Ngan, a 66-year-old fisherman from An Phu Ward, Tinh Bien District, An Giang Province, said that he has never had so much free time in the floating season for the past 35 years.

As a Tuoi Tre (Youth) newspaper correspondent drove along the Vinh Te channel in An Giang, he could not see numerous fishing boats piled up with fish and freshwater crabs as he had expected.

The image of busy small boats filled with fresh catches is now something in the past.

Near the riverbank, several fishing boats stayed anchored calmly. Their owners were sitting on the bank, with their eyes craving floodwaters rising fast.

Every seventh month of the lunar calendar, water from the upper Mekong River usually flows into the lower region, carrying rich alluvium as well as huge fish and shrimp resources.

That is normally the start of a happy season for fishermen here.

“Just around ten years ago, you would have seen merchants and us busy selling and buying fish all day,” Ngan told your correspondent.

“We started our business at 3:00 am and there had been a lot of traders already waiting for us. We sold out very quickly."

His nephews got tired of eating too much Siamese mud carp as there were a lot of fish netted. Some people purchased the type of fish for their family meals while others used it to make fish sauce, Ngan said.

On the 10th and 25th days of a lunar month, a large volume of Siamese mud carp fish can be caught, said the fisherman.

These days, his 1km-long net could trap a ton of fish. On normal days, he could get around hundreds of kilograms of fish.

Around 20 years ago, a fish catch could be so heavy that he had to pull it up quickly. Otherwise, millions of fish inside might tear up his net.

Since last year, however, the once-rich source of fish and income has been gone.

Despite in the flooding season, water levels rise slowly and recede quickly, resulting in a poor aquatic resource and thus dampening the livelihood of local fishermen.

“Fish have been scarce for the last two to three years. It’s now the middle of the eighth lunar month, but I have not seen rising water yet,” he added.

Therefore, he has used his fish nets for catching rats.

The Vinh Te canal is just one among numerous sufferers in poor floating seasons. The Tha La canal in Vinh Te Ward, Chau Doc City, An Giang is in the same plight.

Not a single boat was spotted by your correspondent all the way along the canal. Only Phan Thi Tuyet, a 50-year-old woman, was pulling a fish net.

Tuyet and her husband often worked hard in previous floating seasons. But this year, the couple watch the nets by turns.

“It was such a good time. I could earn over VND10 million [$432] to cover my children’s tuition fees. There were less fish last year, and this year has turned out to be worse.”

Over the past month, she has been impatiently watching her nets, hoping to see fish or something.

“It’s never been so bad in 20 years. Siamese mud carp is known as the specialty of our hometown, but now we even don’t have enough to eat,” she added.

“If things keep going on like this for the whole flooding season, we may face starvation.

“It’s so distressing but I have been doing this job for my whole life. Even one or two kilograms of fish is good for me.

“My children have lost their jobs in Binh Duong Province because of the COVID-19 pandemic. I’m going to tell them to go back home and we’ll try to place nets somewhere else. Maybe, we will get more fish.”

For decades, these poor people have heavily depended on rich aquatic resources brought by floating seasons, as a gift from nature.

However, drought has turned severe in the Mekong Delta in recent years, making water levels in rivers stay low. As a consequence, many fishermen could not earn a living with their job.

On the Nam Nao River, Truong Van Chan, a 55-year-old fisherman from Phu Huu Ward, An Phu District, An Giang is eagerly waiting for the waterflow from Cambodia’s Tonlé Sap Lake.

In free time, he and some others usually walk around to pick wild veggies for sale.

“I heard that this year’s floodwaters will be extremely low, but we’ll still wait. Sometimes, I do place some nets in rivers and hope to catch something. That is better than doing nothing,” he said.

In Thanh Hoa, Moc Hoa, and Tan Hung Districts in Long An Province, fishermen are going through tough days, too.

His children used to help him with the job, but now they have moved to large cities to seek a job.