Bui Xuan Thanh, a retired aircraft repairman, has earned a reputation as a wizard in Da Nang, Vietnam for his dexterity in building miniature fighter jets that are surprisingly true to life.

Since his retirement in 2015, 67-year-old Thanh has worked in a quiet neighborhood on Le Trong Tan Street, home to Da Nang’s largest concentration of households of those serving in the military and located next to air defense bases, where he can freely indulge in his lifelong passion: building miniature military aircraft.

Over the years, he has added thousands of such models to his unique repertoire, which many are eager to get their hands on.

His labor of love can allow him self-reliance and a good income to provide for his family even in his old age.

Thanh left his hometown in a northern locality for Da Nang nearly 40 years ago.

His working days typically begin at 9:30 am, with a telltale sign being the gentle purr of his grinding machine.

In his six-square-meter makeshift workshop crammed with materials right in his yard, Thanh intently gives the finishing touch to his models, key to tying his designs together.

“This is my third batch of orders by customers from Ho Chi Minh City so far this month,” he said.

“There are times when my clients are waiting patiently for me to finish the pieces,” he said with a model multi-role SU-30MK2 in his hand, adding he builds at least 10 items to meet high demand each month.

Thanh graduated with flying colors from the air force’s aviation mechanics program back in 1973.

Two years later, he found himself working as a technology quality controller at Factory A39, based in Yen Bai Airport in the namesake northern province, before getting transferred to Factory A32 following its merger with the former unit.

He said despite being an airport ground staff, he was denied frequent access to the fleet of jets, which his unit took great pride in.

The jets’ designs have fascinated the young man for as long as he could remember, and to downsize it to a miniature using his ingenuity has been an idea constantly lurking at the back of his mind.

When the establishment he worked with relocated to Da Nang in 1980, he tried to make his debut mini-version of a MIG-21 jet with his hands and intended the piece as a gift to his father to flatter him and make him proud.

Unable to observe a physical aircraft, Thanh made a mental design before realizing the idea on paper in the form of drawings.

This was followed by stages in assembling parts in the most meticulous manner.

The product of his imagination ended up looking just like a grasshopper, though, with a clumsy combination of a MIG-21’s front and a MIG-17’s wings.

There was never a down moment, though scaling down the jets into a petite model was such a challenge which cost him heaps of time.

As regulations at his workshop eased during the late 1980s, Thanh would make his way to the final-phase workshop for a good look at the aircraft.

A long-time fan, the man found himself overwhelmed the first time he got up-close and personal with the military's flying machines while trying to gulp in as many of their details as possible before jotting them down at home and pondering over his miniature interpretation.

Appreciative of his passion, the factory director summoned him to his office and provided him with a catalog of fighter jets.

The executive’s next move changed Thanh’s infatuation in a whole new direction.

When Thanh was working on his third aircraft model, his superior called him to his office again, and to his elation, the latter trusted him with a meticulously detailed scale drawing of the entire combat fleet the facility was in charge of.

“The drawing was just what I needed. I was exhilarated,” Thanh recalled, adding he kept telling himself to ensure its confidentiality.

With all the questions in his mind solved and high-precision scales in hand, the man excitedly got straight to work.

As a one-man team, Thanh did not mind spending his free time perfecting the most nominal details and putting together several components with great skill and precision.

As he continued to refine his products, Thanh was tasked with building three fighter jet models from jackfruit wood, with the items being put on display in the facility’s memorial center.

The former aircraft mechanic said that under his superiors’ command from 1985 to his retirement, a large part of his working hours was dedicated to his hobby and his painstakingly detailed scale models were intended as souvenirs to high-profile visitors to the facility, including state leaders such as late Party General Secretary Do Muoi and former National Assembly Chairman Nguyen Sinh Hung, as well as foreign delegations.

According to Thanh, with years of experience stacked up until his retirement, he now spends all his time scrutinizing old and modern combat aircraft and building his miniature versions to cater to his growing customer base.

All his products come down to a single material: aluminum.

The retiree orders refined aluminum sheets and has them prepared into hulks by a metalsmith.

He knows his job too well, completing all the technically demanding phases that eat up much of his time including tapering off impact resistant wings, positioning rocket pads, and putting antennas and radars in place before giving the pieces the finishing touch.

He said the work requires great patience and long-accumulated knowledge of the combat machines to build items rich in intricate, authentic miniature detail.

The technician-turned-craftsman can make 10 to 15 miniatures out of his hobby each month, or more than 100 each year.

The pieces, most of which are custom-made, weigh anywhere between one and a half and three kilograms each. 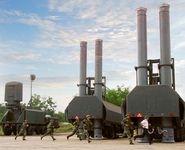 A recent visit paid by a Tuoi Tre (Youth) newspaper reporter offers glimpses at the life, wholehearted dedication, and rigorous training of members of a brigade that operates the Russian-made Bastion-P missile system in south-central Vietnam