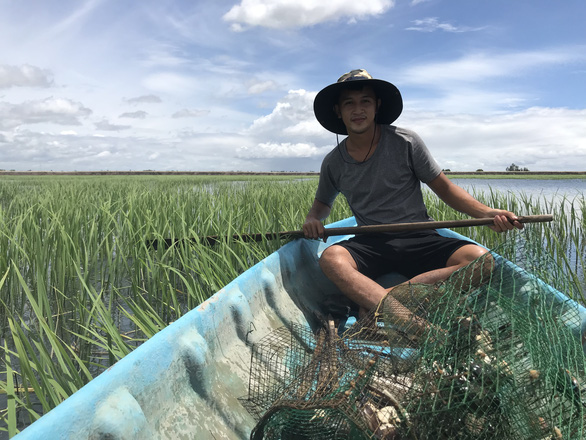 Rather than wait for seasonal flooding to bring an increase in local fish populations – a phenomenon which has been negatively impacted in recent years by climate change – locals across Vietnam’s Mekong Delta region are combining organic farming and fish farming to ensure food supplies all year long.

Every seventh month of the lunar calendar, the Mekong River surges and flows south, carrying rich alluvium and massive amounts of fish and shrimp to southern Vietnam.

Normally, this time of year – known locally as ‘floating season’ – is a busy time for fishermen, but climate change in recent years has led to water levels that rise more slowly and recede more quickly, resulting in a dwindling fish resource that has severely dampened the livelihoods of local fishermen.

Now, instead of heavily relying on the rich aquatic resources brought by the annual ‘floating season’ as they have done for decades, many residents throughout the region have begun raising fish and giant prawns right in their organic rice and vegetable paddies – ensuring a steady supply of both fish and produce all year long.

Among these farmers is Bui Tri Nhan, a resident of Hong Ngu City, Dong Thap Province, who has become well-known throughout the region for his fish and rice farming model.

It is here that he began farming rice, ca linh (cyprinid fish that thrive in parts of Southeast Asia), and giant freshwater prawns all at once in the same place.

So far, his gamble on the new farming model has paid off.

While dwindling natural fish populations have hurt many fish famers, Nhan has benefited greatly thanks to higher demand and lower supply.

“I pocketed more than VND100 million (US$4,389) in profits from fish alone. This model is much more lucrative than rice farming,” Nhan said.

Nhan switched from growing just rice in his current hybrid model after learning about a series of programs initiated by the local administration on how to improve the lives of residents during the annual flood season.

After doing some research, he began improving soil quality on his land, building dykes, and raising about five million fingerlings.

Much of his success, he says, is due to his use of water pumped directly from rivers rich in nutrients that his fish can feed on.

“After subtracting my initial costs, the money I earned from a 1.5-metric-ton batch of fish raised alongside giant freshwater prawns was pretty impressive.”

After removing the fish from the paddies, Nhan applies organic manure to his rice crops.

He typically grows three varieties at the same time so that he can choose the best strain for the following crops.

One month after sowing the seedlings, the aspiring farmer releases 100,000 giant freshwater prawns selected from a population of 300,000 into his paddy.

According to Nhan, the prawns are doing well and weigh about 10 grams each.

“The prawns thrive on ephemeral eggs and moss. This gives them a special taste,” Nhan said, adding he also winds up with crabs and other fish that wash into his paddies from a local river.

According to Nhan, these extra crabs and fish earn several hundred thousand dong (VND100,000= $4.4) each day.

Huynh Van The, a resident in Thuong Lac Commune, also located in Hong Ngu District, has a hybrid farming success story of his own.

The built a ditch system on a 10-hectare paddy to trap fish that washed in with the rising river at the beginning of the flood season.

The stressed that his success is due to his focus on keeping a balance between his rice crops and his fish population.

“The model guarantees a clean, organic, and sustainable supply of rice as the plants thrive mostly on fish feces and alluvium,” The explained.

“It is mostly about the taste of the fish. They survive well by eating riverweed and rice roots. It makes them taste great.”

This seasonal farmer reaped about four metric tons of crystal-eyed catfish last year, and sold them for VND85,000 ($3.7) per kilogram, much higher than the traditional two-crop farming.

According to the Dong Thap Province Department of Agriculture and Rural Development, the administration is currently implementing several livelihood models to support residents during the flood season.

These projects are being executed in districts located in upstream river areas, including Hong Ngu, and yield revenues that are VND5-35 million ($219-1,536) per hectare higher compared to those from previously employed approaches.

According to Duong Van Ni, an environmentalist from Can Tho University, three requirements are needed for new farming models to thrive, including rewarding revenues, sustainable supplies that do not adversely impact the environment, and few community conflicts.

“Community conflicts generally occur between gardeners and farmers, who have different needs for water,” Ni explained.

He also stressed the need for masterplans from the local administration and adaptability to the market and environment.

The main goals of these models include improving locals’ livelihood, rejuvenating soil, building ecological diversity, and keeping water levels in good moderation in order to avoid flooding or droughts in downstream areas.

Both Nhan and The grow organic rice.

Apart from selling his fresh husked rice to traders, The grinds the husked rice into a product that can be readily used and sells it to customers for VND20,000 per kilogram.

Meanwhile, Nhan shared that he will work with Hong Ngu District’s division of economic issues to build his own organic brand of rice during the flood season.

Farmers across the Mekong Delta who have been hit hard by climate change are readily pivoting to find new sources of income.

Le Thi Thuy and her husband, farmers from Duc Hue District, Long An Province, recently switched from growing rice to raising he nuoc (fresh water garlic chives) and have raked in earnings that are three times higher than what they earned from traditional rice farming.

“I sell them [garlic chives], which don’t need as much care or manure as rice, at VND10,000 ($0.4) per kilogram at the cheapest,” Thuy shared, adding that while customers appreciate the plants for their fragrance, sweetness, and nutritional value, she appreciates that they create the perfect environment for her fish to thrive.