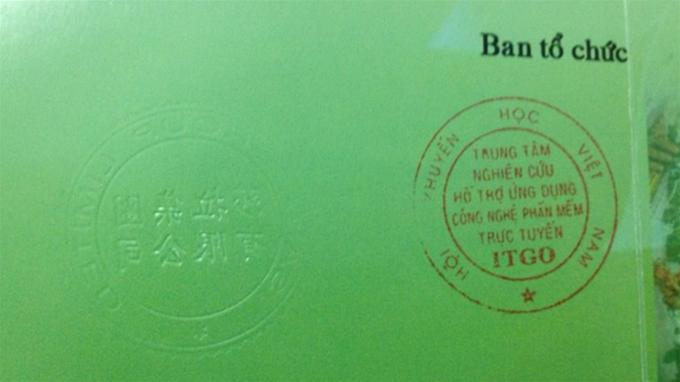 A watermarked stamp with Chinese characters found on both sides of the complementary tickets to the finale of Miss Itgo 2013 or Miss Intellectual Vietnam 2013 contest held yesterday in the northern central province of Ha Tinh is raising concern.

Since there was high demand for tickets to the event, such complementary tickets, which were supposed to be free, were sold for VND500,000 to VND1 million each on the black market.

Vo Hong Hai, director of Ha Tinh’s Department of Culture, Sports, and Tourism, told Tuoi Tre that the Chinese words on the stamp means “Sara Limited Company in Fujian, China” and the organizers put it on the tickets to prevent fake ones.

According to Trinh Huu Tuan, the head organizer, they watermarked the stamp because Sara Company based in Nghe An central province is one of the show’s sponsors.

The biennial Miss Itgo is aimed at honoring the intellectual beauty of Vietnamese women. Eighteen-year-old Vo Thi Thuy Trang, an overseas student in New Zealand, was crowned Miss ITgo 2013 and won VND50 million in cash, a free trip to Thailand, and a full international MBA scholarship.