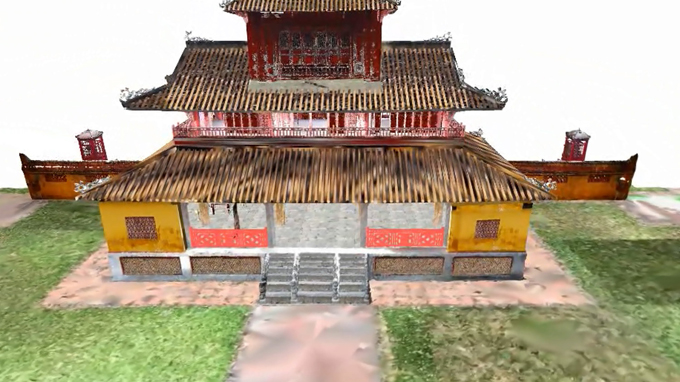 The Hue Relic Preservation Center recently announced the 3D images of the edifices at The Mieu – Hien Lam Cac, which is part of the Hue royal palace to help with their restoration.

The highly accurate 3D images will help with the measurement, design, planning and restoration of the edifices on an experimental basis.

According to Phan Thanh Hai, head of the center, more edifices will be re-created in 3D models with an aim to establish a digitalized data bank on Hue relics and better preserve them.

His center will also collaborate with filmmakers to produce a 3D film on The Mieu, where kings of the Nguyen dynasty (1802-1945), the country’s last monarchy reign, have been worshipped. In the past, entry to the sacred place was restricted to royal males and even the queens weren’t allowed to enter. The time-honored rites which took place in the area will also be depicted in the film.

Hundreds of thousands of material pages have been digitalized. Among them are historically momentous materials such as an anthology which is believed to be hand-written by King Thieu Tri (1807 – 1847), the Nguyen dynasty’s third king, and a set of law books printed in 1814 during the reign of King Gia Long (1762 – 1820), the founder of the Nguyen dynasty.

All the digitalized materials will be returned to their owners, and the library will also keep the copies which are available to the public.