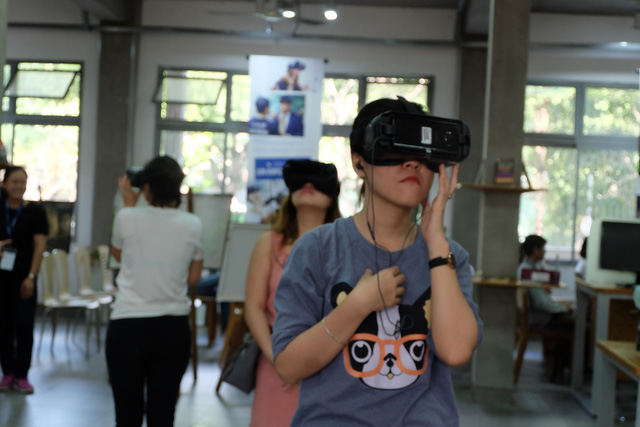 A great number of enthusiasts flocked to the General Science Library of Ho Chi Minh City on the weekend in order to relish a first-time virtual tour through Son Doong Cave, the world’s largest known underground passage.

More than 1,800 people in Ho Chi Minh City had registered via Facebook for this adventure, which lasted 30-35 minutes.

This virtual reality tour, taking place in a 100m² room of the building, was organized on Saturday and Sunday by Save Son Dong, a group formed by young Vietnamese people in an effort to protest against the proposed construction of a cable car system through the cave.

The virtual trip was aimed at raising public awareness of the value of Son Doong and alerting people to a glimpse of the nightmare scenario of tourists overrunning this place, according to Le Nguyen Thien Huong, 31, the group’s founder.

Son Doong, located in Quang Binh Province in north-central Vietnam, was found by a group of explorers from the British Cave Research Association in 2009, according to National Geographic News. They confirmed it as the world’s largest known cavern.

Before handing tour gadgets to visitors, Huong played a panoramic video of the natural wonder, its ongoing stalagmite formation and fragile, light-sensitive ecology.

The film was shot by the Swedish journalist and photographer Martin Edstrom, who won the first prize in International Photography Award 2015 for the #SonDoong360 Project.

After wearing the virtual reality headsets and headphones, the visitors found themselves standing in close proximity to the murmuring stream at Son Doong Cave’s entrance, accompanied by a tour guide introducing the spot.

Arrows within the visual sight of the headset took the participants inside, giving them the awe of a majestic cavernous interior with sparkling stalagmites.

Out of the blue, they realized they were on a colossal stone named “Watch Out for Dinosaurs,” the cave’s symbol, from which they could take a look in multiple directions.

After several scenes, the visitors were entranced by the imposing array of ancient lime rock pieces, a mesmerizing view of the sky from the depths of the cave, and the sound of water splattering on rock; in such a way that they failed to know they were still in the city.

At some time during the trip, engulfed in the inky darkness penetrated by faint light from the entrance, they hastily fetched a flashlight, only to be amazed by a stalagmite wall of breathtaking beauty or somebody’s footprints on the bottom stone.

This tour followed the same event held by Save Son Doong in Da Nang City, which drew more than 1,500 visitors.