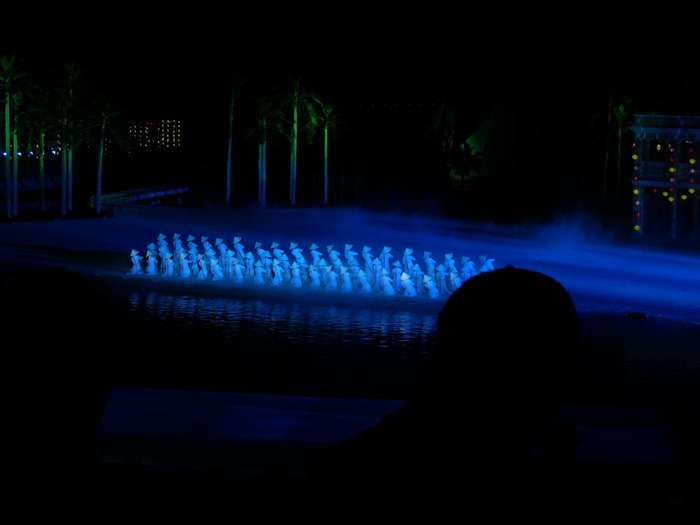 ‘Hoi An Memories,’ a live show which opened last weekend in the resort city of Hoi An, located in the central Vietnamese province of Quang Nam, attracted a wave of criticism for its heavy use of Chinese elements and failure to connect with the local audience.

The show, advertised as “the biggest and most spectacular” show ever preformed in Hoi An, left the audience confused about whether they were watching a representation of the city in its old days or just an alien culture.

The outdoor venue itself, said to be the biggest in Vietnam, has also been denounced as an eyesore for the tranquil, centuries-old city.

Prior to its opening last weekend, ‘Hoi An Memories’ had been much anticipated for the grandeur behind its production, boasting hundreds of dancers, actors, and art directors.

The show was advertised as a fusion of choreography, music, and lighting meant to represent ancient Hoi An’s legacy as a busy trading port that connected Vietnam with world merchants through the famous silk road of the sea.

However, Hoi An-based writer Tran Ky Trung found ‘Hoi An Memories’ to be a complete flop, describing it as a montage of “alien and forced” images of a barely recognizable city.

“I can’t remember every detail of the show but I can say for sure that the people and culture portrayed were from a different country – ancient China to be exact,” Trung said.

“It was not until a life-sized model of the Japanese Covered Bridge – a famous attraction in Hoi An – appeared toward the end of the show that I realized they had been trying to portray Hoi An,” he added.

Phung Tan Dong, an expert on Hoi An culture, told Tuoi Tre (Youth) on Wednesday that he plans to call for a boycott of the show.

“Many of my friends who are long-time Hoi An residents also shared my sentiment that the show felt strained and fake,” he said.

Dong added that he had been consulted by a group of the show’s producers months before it premiered, but he had not been aware that they were asking for his opinion to produce such a show.

“They were a large group, all speaking Chinese,” Dong recounted.

“They never told me that they were seeking information for a show.I wouldn’t have cooperated had I known their intentions,” he said.

“What characterizes Hoi An is its depth, serenity, understanding, and subtlety.Not hundreds of people running around under blinking spotlights in an ostentatious demonstration of scale,” said Nguyen Su, former Hoi An Party chief.

‘Hoi An Memories’ is performed at an outdoor venue built on an islet as part of a privately-developed ten-hectare eco-tourism complex.

Since the project broke ground in 2008, local residents and officials have reported disruptions to the water current of the Thu Bon River and land collapse along its banks.

Despite objections, the administration of Quang Nam Province, maintained that the project was necessary for boosting the city’s tourism and refused to revoke its approval.

Locals have also reported excessively loud noise coming from the outdoor theater since its launch, a threat to the tranquil atmosphere of the city’s ancient town.

Responding to critics, Nguyen Van Son, deputy chairman of Hoi An City’s administration, said the show is for entertainment purposes and therefore does not need to be historically accurate.

“I think we should acknowledge the fact that this is the biggest outdoor theater in Vietnam with thousands of seats,” Son told Tuoi Tre.

“The show offers an additional entertainment option for tourists to Hoi An which is necessary since the city currently lacks the proper tourism products to attract visitors,” he added.

According to an official from the provincial culture department, the script for ‘Hoi An Memories’ was approved by Hanoi’s Department of Culture and Sports. Therefore, authorities in Quang Nam or Hoi An are merely responsible for ensuring that the actual performance follows the script.