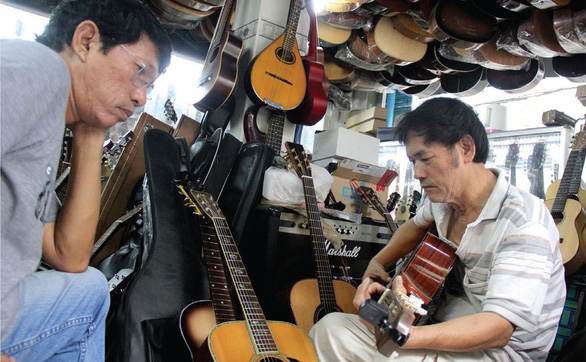 Nguyen Thien Thuat Street in District 3, Ho Chi Minh City, is best known for its wide array of music stores. But it is not just the stores that make the street popular.

There is an aura of good old sound here that makes it all so alluring.

The tones of string instruments echo along the street that is less than one kilometer long.

A sense of refreshment fills the air.

The story of a street that sells guitars, violins, ukuleles, and lots of other instruments goes back to a few individuals who popularized the service of mending acoustic guitars roughly 40 years ago.

Son, the 63-year-old owner of Ngoc Son Music Store, said that when he first came to Saigon, which is the old name of the city but is still widely used now, the one thing he did when he was down was to play the guitar.

He and his friends would gather around for a good singing and guitar playing spree after working hours.

It was their only way to put their feet up.

His guitar notes got so popular that people started asking him to fix their instruments.

He decided to set up shop. Others soon followed suit.

In no time, music stores sprang up. Now they number around 30.

Another ‘old hand’ is Duy Ngoc Store, whose owner Ton That Anh has dedicated his last 40 years to the prosperity of the whole street.

“To me the heyday of the street was not the big profits,” Anh said.

“It was the time when we were valued and honored. Around 1990, the guitar was trending. Guitarists would come here to have their instruments fixed.

“Therefore we had to put quality on top of our priority list, and we have done so ever since. We provide an almost-lifetime guarantee for any single instrument we sell.”

Anh further said that he would mend guitars for free even after 10 years of use, as long as they do not get broken.

“Each guitar has our soul embedded in it,” the man said.

Perhaps it is this strong sense of discipline that has drawn the attention of string musicians from as far as the EU, Chile or Colombia.

The world’s leading newspapers have also had an interest in such craftsmen’s secrets – how they manage to create guitars so rich in sound without the help of technology.

“Once a foreign journalist came asking about how we make our guitars,” Anh said.

“I said we used to be 100 percent manual, but it’s a 50-50 process now. We only use machinery to deal with the smoothing of the trunk, the Polyurethane (PU) covering, the paint, and others.”

“The acoustics are still done manually. This explains why my guitars are warm in tone while his is a little sharper.”

Rebuilding – the art of delicacy

Artisans along this street have to deal with a tough request: rebuilding instruments to their original state.

What counts to many of the customers here is the reminiscent sound their instruments bring.

Tien, 57, came to Ngoc Son Store to have his two old guitars repaired.

What he wanted to find was the old sound that got lost after much wear and tear.

With his guitars rebuilt, he feels in his heart a gap filled.

Bich Huyen, 26, used to be a student of the Hue Conservatory of Music in Hue City, central Vietnam.

She did not see through her musical career though.

As a businesswoman in Ho Chi Minh City, she finds herself carried away with all deadlines and hard work, but a month ago she retrieved her dearest Vietnamese monochord from her hometown.

“This monochord was a gift from my teacher 15 years ago,” she said to the store owner.

“He is no longer around, but I want it intact so that every time I play, I can still feel his presence.”

She prefers the original bridge on the instrument, not the plastic type so popular on modern ones nowadays.

“Many spend more money getting an old one fixed than buying something brand new,” the artisan said after she left.

“They’re willing to spend more so that every single detail on their instrument is back to factory condition.”

He once wanted to trade any of his newly-made models for an old guitar of a customer, but he got a shake of the head.

“Many can afford dozens of top-notch guitars, but they will never part with their old ones,” he said.

Whether one is new or old to the sound of the strings, this place surely will touch their heart.