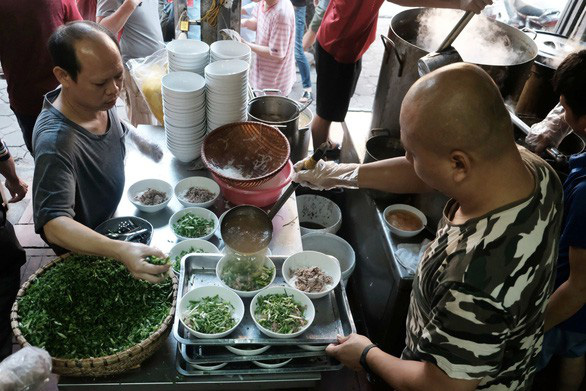 Tuoi Tre (Youth) newspaper is calling on readers to join the voting round of a competition to choose the top ten most loved pho restaurants in Vietnam in the lead-up to the 2019 Day of Pho.

December 12 was officially designated as the Day of Pho in celebration of Vietnam’s effective traditional dish in 2018, one year after the first ‘Pho Day,’ an initiative by Tuoi Tre, was held.

The third Day of Pho will be held on December 8 this year at White Palace on Pham Van Dong Street in Thu Duc District, Ho Chi Minh City, with support from Acecook Vietnam.

Besides the main festive day, a vote-based competition is underway to choose the top ten pho brands most loved by consumers in Vietnam.

Readers and owners of pho brands submitted a total of 112 nominations, 82 of which later advanced to the preliminary round.

On Saturday afternoon, a panel of judges made a shortlist of 30 brands eligible for entering the official voting round based on the number of nominations they received as well as the nominators’ stories explaining why they nominated the brands.

The shortlisted brands will be announced on October 31 and voting will open immediately after the announcement on Tuoi Tre’s online platform, https://tuoitre.vn/.

The poll will close on November 31.

The organizers have also awarded prizes to five readers who shared the most interesting and meaningful stories of the pho brands they love.

The 2019 Day of Pho will also feature a contest to search for the best pho makers in the country.

Registration is open to both local and foreign cooks until October 31 at https://ngaycuapho12thang12.tuoitre.vn/ and https://www.facebook.com/NgayCuaPho/.

The qualifying rounds are scheduled to take place in Ho Chi Minh City on November 16, and in Hanoi on November 23.