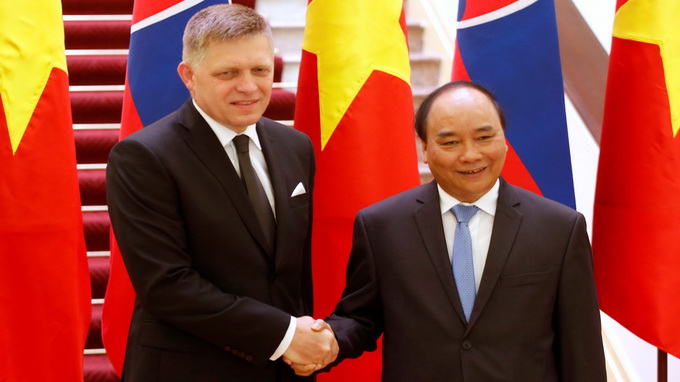 Vietnam and Slovakia issued a joint statement on Monday pledging to accelerate bilateral trade and cooperation following the Slovakian premier’s visit to the Southeast Asian country.

The Slovakian premier arrived in Vietnam last Saturday for his four-day visit to the country, during which he met with Vietnam’s Party Chief Nguyen Phu Trong, State President Tran Dai Quang, and Chairwoman of the lawmaking National Assembly Nguyen Thi Kim Ngan.

This is the second time Fico has visited Vietnam as head of the Slovakian government, and the first since he was re-elected to the position in March.

In a joint statement following Monday’s meeting, both premiers praised the positive results of trade and investment cooperation between the two countries over recent years.

The leaders also pledged to increase bilateral trade turnover with the aim of balancing trade between the two countries.

Enhanced cooperation in the fields of education and training, culture, tourism, laws, science, and technology were also stressed by the prime ministers in their joint statement.

Regarding the East Vietnam Sea, the two parties vowed to maintain peace and promote maritime and aviation safety and security as well as unobstructed legal trade at sea.

The premiers agreed that disputes over territorial land and waters should be resolved by peaceful measures in accordance with international law.