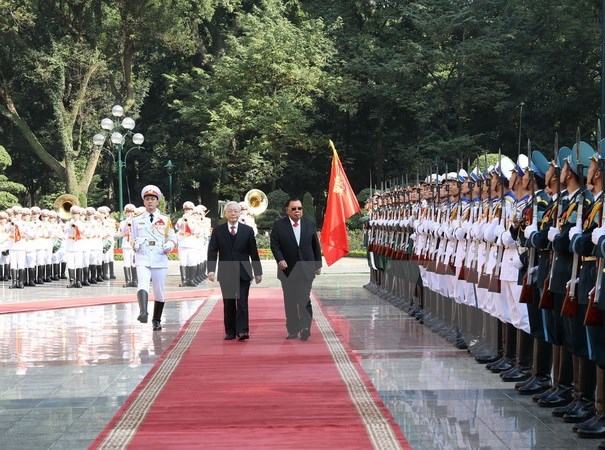 Vietnam and Laos have agreed to enhance their special relationship, marking a successful year in the two nations’ bilateral cooperation.

State President and General Secretary of the Lao Party Bounnhang Vorachith joined talks with Vietnamese Party chief Nguyen Phu Trong in Hanoi on Tuesday morning, as part of his official visit to Vietnam from December 19 to 21.

General Secretary Trong considered the trip a historic milestone, following a successful year of the two countries’ friendship and solidarity as well as the 55th anniversary of their diplomatic relationship.

The special relations between Vietnamese and Lao Parties and States hold the key to peace, stability, cooperation and development in the region and the world, the two leaders remarked.

They agreed on the effective realization of agreements signed between the two countries’ Parties and States and the Vietnam-Laos Joint Statement.

More efforts will be exerted to deepen the two nations’ political ties and to boost socio-economic development and international integration.

Focus will be directed on personnel training at all levels, promoting the spirit of the friendship solidarity year, and raising public awareness of the traditional friendship and special relations between Vietnam and Laos, especially among the younger generation.

The two countries will also strengthen coordination with Cambodia to implement the trilateral agreement of the Cambodia-Laos-Vietnam Development Triangle Area (CLV).

Regarding the East Vietnam Sea issue, the two leaders stressed the importance of maintaining peace, stability, security, safety and freedom of navigation and overflight in the maritime area.

All disputes must be settled via peaceful means in accordance with international law, including the 1982 United Nations Convention on the Law of the Sea (UNCLOS).

Following the talks, they witnessed the signing of several significant documents and agreements.