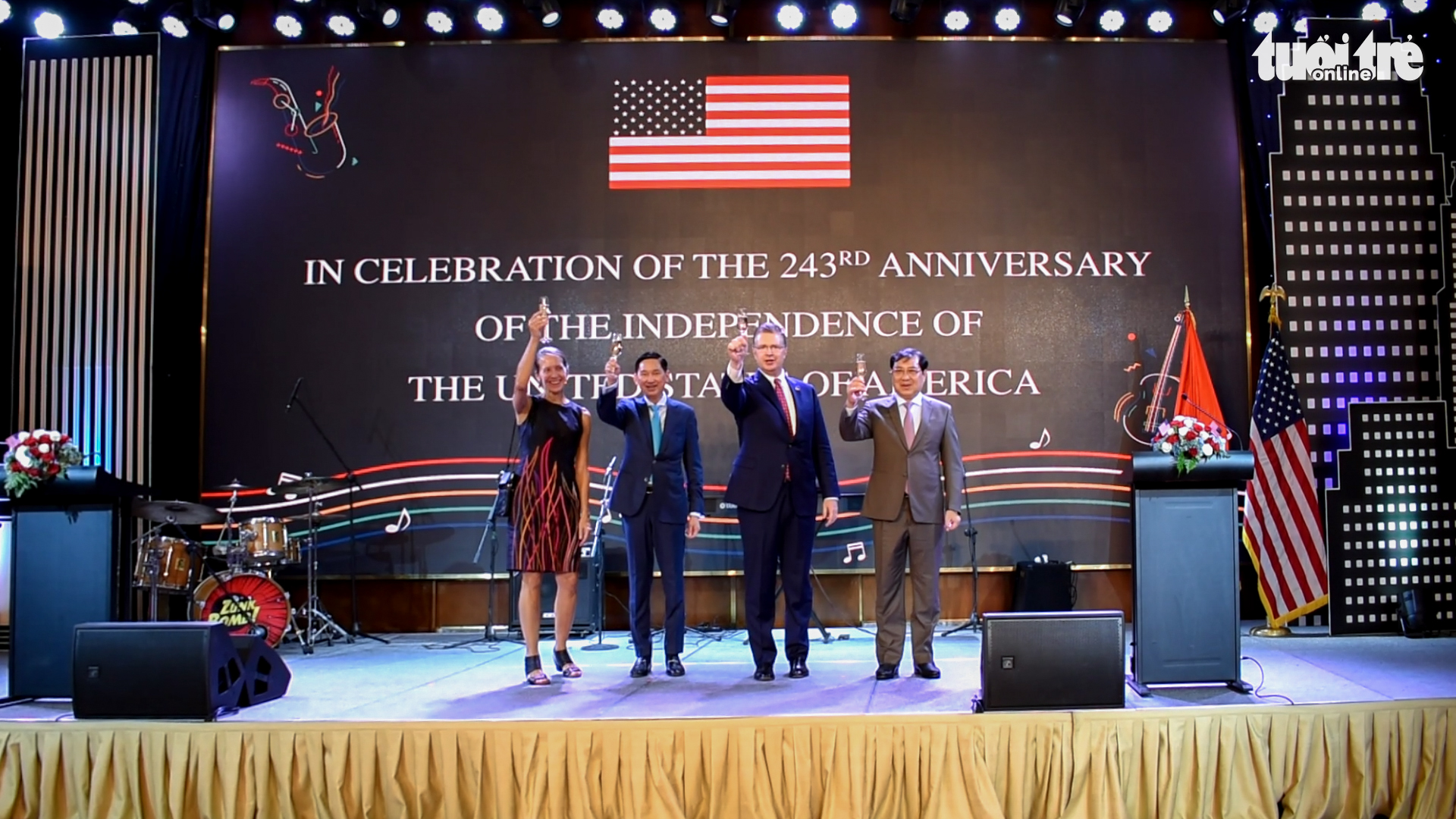 The United States Consulate General in Ho Chi Minh City hosted an early celebration of its country’s 243rd Independence Day (July 4) on Wednesday in a night filled with jazz, laughter, and the exchange of warm words.

The event was held at the Vinpearl Luxury Hotel located inside Landmark 81 – Vietnam’s tallest building – in Binh Thanh District.

Vietnamese dance crew Saigon Swing Cats kicked off the night with a lively rendition of “Lindy Hop," a classical jazz dance made popular in the U.S. during the 1930s and 1940s.

The performance was followed by a saxophone duet of jazz classic “Take Five," performed by prominent Vietnamese saxophonist Tran Manh Tuan and his daughter An Tran.

Addressing guests at the event, outgoing Consul General Mary Tarnowka appeared emotional as she remarked on how it was her last Independence Day as consul general in Ho Chi Minh City.

“I look back on my time over the last three years with a great sense of satisfaction,” said Tarnowka, who replaced former Consul General Rena Bitter in September 2016.

“I’m both honored and proud to have led the consulate team as we brought the [Vietnam-U.S.] relationship to an all-time high,” the consul general remarked, adding that the countries have continued to deepen and strengthen their comprehensive partnership by promoting mutual peace, prosperity, and people-to-people ties.

“Though my time as consul general is coming to a close, I will take away many great memories,” she reflected.

Tarnowka will leave office in July to return home to take on a new position in the U.S. Department of State. Her successor, whose identity remains undisclosed, will take office in August.

Ambassador Daniel Kritenbrink shared that Vietnam-U.S. relations are at a peak, as evidenced by Vietnam’s successful organization of the U.S.-North Korea Summit in Hanoi in February and President Donald Trump's two visits to Vietnam.

The relationship has also been reinforced by U.S. aircraft carriers’ visits to Vietnam in 2018, cooperation in treating dioxin (Agent Orange) contamination at Bien Hoa Airport in the southern province of Dong Nai, and assistance to Vietnam in UN peacekeeping activities, he said.

Over 30,000 Vietnamese students are now pursuing study in the U.S., the ambassador added.

Revisiting the two jazz performances at the start of the night, Ambassador Kritenbrink noted how jazz, much like diplomacy, “calls for teamwork, trust, and mutual understanding."

“Jazz, at its heart, is a cooperative art form,” he said.

“I encourage all my colleagues – American, Vietnamese, and friends from other countries – to embrace this spirit of jazz in our work,” the ambassador added.

Addressing the event, Ho Chi Minh City deputy chairman Tran Vinh Tuyen expressed his belief that, with efforts made by both sides, the Vietnam-U.S. comprehensive partnership will continue to grow.

As Vietnam’s economic, cultural, scientific and technological hub, Ho Chi Minh City has worked together with the U.S. on many cooperative activities.

Trade between the two sides topped US$8.2 billion in 2018, according to the Vietnam News Agency.

The U.S. is the fourth-biggest importer of Ho Chi Minh City’s products and ranks 10th among 106 countries and territories with entities currently investing in the city, with nearly 400 projects worth a combined $1 billion.