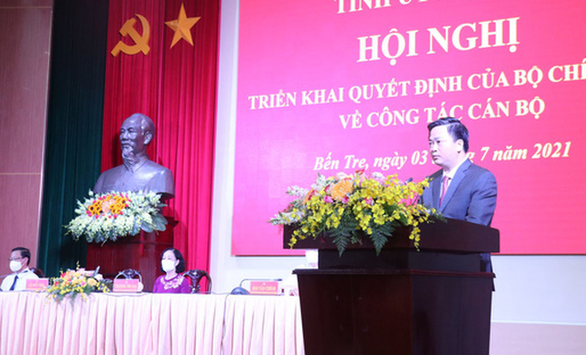 A state-run bank executive has been named Party chief of a province in southern Vietnam this week.

Board chairman of the state-run Vietnam Joint Stock Commercial Bank for Industry and Trade (VietinBank) Le Duc Tho has been appointed by the Politburo as Party Committee secretary of Ben Tre Province for the 2020-25 term.

The Politburo’s appointment decision was announced at a conference held by the provincial Party Committee on Saturday with the attendance of Truong Thi Mai, chairperson of the Party Central Committee’s Organization Commission, who is also a Politburo member.

“I hope Tho, with his ability, intelligence, and strong political will, will bring into play his capabilities to serve the development of Ben Tre,” Mai said in her congratulations to Tho on his appointment.

She also asked the provincial Party Committee to aid the new local Party chief in fulfilling his duties.

With a doctorate degree in economic management, Tho was deputy general director of VietinBank from April 2010 until August 2013, when he was appointed chief secretariat of the State Bank of Vietnam.

In April 2014, Tho was named VietinBank general director and became board chairman of the bank four years later.

From November 2018 until his new assignment, he has served as both chairman of VietinBank and secretary of its Party Committee.