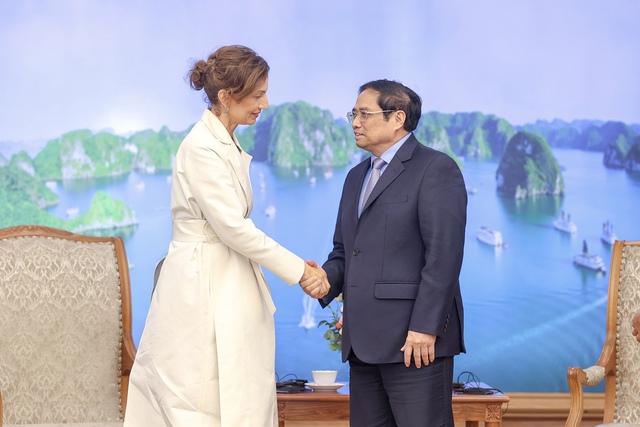 PM Chinh met UNESCO Director-General Audrey Azoulay in Hanoi on Tuesday, as part of the latter’s visit to Vietnam from Monday to Wednesday, according to the Ministry of Foreign Affairs.

The government leader thanked UNESCO for its previous support for Vietnam and affirmed that the Southeast Asian country will continue to be an active and responsible member of UNESCO, contributing to the organization’s efforts for peace, cooperation, and development.

He hoped that UNESCO will continue to consider Ha Long Bay-Cat Ba Islands and Yen Tu Relics and Landscape Complex as world heritage.

Ha Long Bay, located in northern Quang Ninh Province, was twice recognized by UNESCO as a World Natural Heritage Site in 1994 and 2000.

PM Chinh emphasized that Vietnam always treasures education and its infrastructure for workforce training, and asked UNESCO to help the country train qualified personnel to work at multilateral organizations, including UNESCO.

Azoulay expressed her impression of Vietnamese culture and affirmed that Vietnam is a very important member of UNESCO.

The director-general pledged to support PM Chinh’s proposals on enhancing ties between UNESCO and Vietnam.

She hailed the fact that Vietnam values culture and considers education one of the driving forces for national development.

Vietnam is well qualified to host major international conferences, including several by UNESCO in the near future, Azoulay added.

During her visit to Vietnam, Azoulay met a number of Vietnamese leaders, visited multiple places, attended the 50th anniversary of the Convention Concerning the Protection of the World Cultural and Natural Heritage in northern Ninh Binh Province, and participated in the 35th anniversary of UNESCO Resolution 24C/18.65, which honors President Ho Chi Minh.