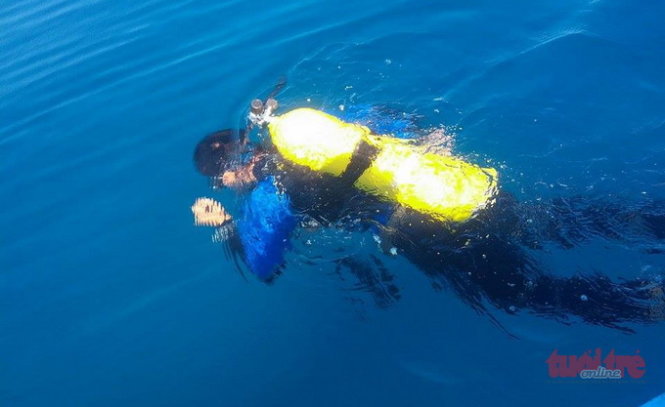 The body of one of the two pilots of two Sukhoi Su-22 fighter jets that crashed off central Vietnam during a training exercise in mid-April was found on Tuesday as search efforts resumed after a days-long hiatus.

>> Warplane pilots could hardly survive in crash off central Vietnam: Lt Gen The body of Lieutenant Colonel Le Van Nghia was found and recovered by frogmen off Phu Quy Island of the south-central Binh Thuan province, a source from the Vietnam People’s Air Defense - Air Force told Tuoi Tre (Youth) newspaper the same day. Frogmen also found part of Nghia’s aircraft at the same location. The recovery of the pilot’s body and the jet part was completed at 5:30 pm.  The body of the deceased pilot, who was vice commander of Air Regiment 937, is being kept at the Binh Thuan’s Phu Quy Island Civil Military Hospital. Search crews are still looking for the other pilot, Captain Nguyen Anh Tu, other parts of both of the Russian-made crashed jets, and their black boxes. The search efforts for the pilots, carried out by the Vietnamese Ministry of Defense, had earlier been halted for six days due to strong waves and only managed to resume yesterday’s morning, Senior Lieutenant Colonel Hoang Van So told Tuoi Tre. The search will keep running until the body of Captain Tu and the other parts of the two aircraft were recovered, said Lieutenant General Vo Van Tuan, Deputy Chief of the General Staff of the Vietnam People’s Army. Air traffic controllers lost contact with both pilots at around 11:00 am on April 16, when they were separately piloting the fighter jets over the waters between Ninh Thuan and Binh Thuan Provinces, about 15km north of Phu Quy Island. Lieutenant General Tuan commented that the two aircraft might have exploded before they crashed into the sea.

The two missing pilots are among the skilled airmen of Air Regiment 937, according to Lieutenant General Nguyen Van Thanh, political commissar of the Vietnamese Air Defense and Air Force.

Lieutenant Colonel Nghia and Captain Tu had over 1,400 and 400 flying hours under their belt, respectively, Thanh said.