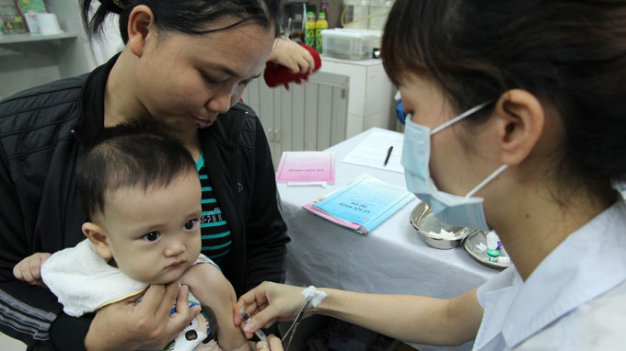 Vietnam among countries with alarming hepatitis B infection rate: WHO

Vietnam is one of the countries whose hepatitis B infections have reached an alarming rate as 10-20 percent of its population has contracted the disease, local health authorities have warned. The Preventive Health Department under the Ministry of Health on Wednesday said that Vietnam is among the nine Western Pacific countries to be placed by the World Health Organization (WHO) on the list of nations where hepatitis B infection is alarmingly high, according to the Vietnam News Agency.   The treatment of hepatitis B is very costly, the department said, elaborating that it costs a patient VND60-200 million (US$2,765-9,218) per year to treat the disease, which attacks the liver, during a period of one to two years, experts estimated. Hepatitis B is the leading cause of liver cancer, with 25 percent of patients developing cirrhosis and then liver cancer if untreated, the department said. The hepatitis B virus is mainly transmitted through blood, from mother to children during birth, or via unprotected sexual intercourse, according to the department. Hepatitis B is a potentially life-threatening liver infection caused by the hepatitis B virus, which can cause chronic infection and puts people at high risk of death from cirrhosis and liver cancer, according to the WHO. Most people do not suffer any symptoms during the acute infection phase, but some people have acute illness with symptoms that last several weeks, including yellowing of the skin and eyes, dark urine, extreme fatigue, nausea, vomiting and abdominal pain, the health organization said. Meanwhile, a small subset of persons with acute hepatitis can develop acute liver failure that can lead to death, the WHO warned. A vaccine against hepatitis B has been available since 1982 and is 95 percent effective in preventing infection and the development of chronic disease and liver cancer due to hepatitis B, the WHO added. The WHO recommends that all infants receive the hepatitis B vaccine as soon as possible after birth, preferably within 24 hours. The birth dose should be followed by two or three shots to complete the primary series. There is no specific treatment for acute hepatitis B, while chronic hepatitis B infection can be treated with drugs, including oral antiviral agents, to slow the progression of cirrhosis, reduce the incidence of liver cancer, and improve long-term survival, the WHO said.