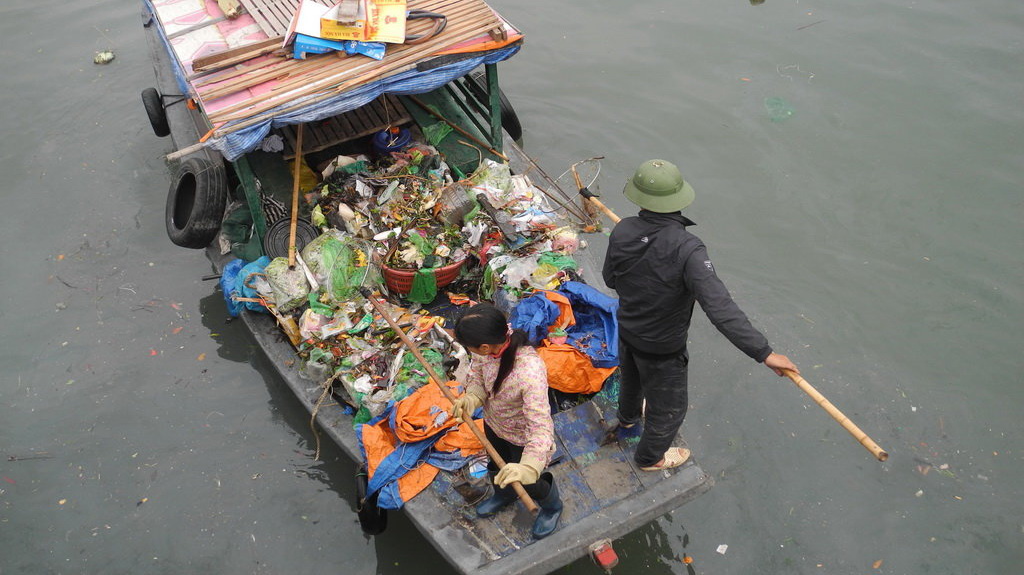 Ha Long Bay cleaners pick up as much as two metric tons of trash off northern Vietnam’s iconic site every day, according to the attraction’s management.

Located in northern Quang Ninh Province and bordered by the Gulf of Tonkin, Ha Long Bay mesmerizes tourists with thousands of limestone karsts and isles in various shapes and sizes scattered over an area of around 1,553 square kilometers.

A UNESCO World Heritage Site since 2000, the bay is visited by around three million domestic and foreign tourists each year on average, according to Vietnam’s General Department of Tourism.

However, Quang Ninh’s fast-growing tourist industry, coupled with thousands of fishing vessels operating off its coast, has resulted in large amounts of garbage being dumped into the bay, according to Tran Quoc Minh, director of Ha Long Bay’s management authority for public services.

As much as two metric tons of trash is collected by bay cleaners on a daily basis, Minh told Tuoi Tre (Youth) newspaper on Tuesday.

Most of the trash is found near the shore, having been dumped into the water via sewer pipes or by fishing vessels operating near the coast, Minh said.

According to the director, Ha Long Bay currently employs a team of four trash-collecting boats tasked with cleaning up eight kilometers of coastline including areas as far as 700 meters from the shore.

During rainy seasons, even more trash is washed up by high tides, Minh said.

According to Tuoi Tre’s observations on Monday afternoon, most of the trash is concentrated at a nearby pier, where hundreds of fishing vessels are docked after long operations at sea.

“There is a trash collecting team but garbage is dumped into the water as quickly as it is collected,” said Hung, one local resident.

According to Minh, the attraction’s management authority spends VND5.8 billion (US$255,000) every year on the collection of trash.