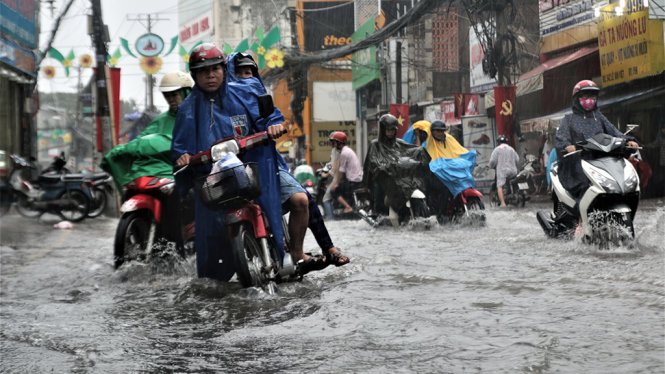 A prolonged deluge early in the rainy season swept through Ho Chi Minh City, resulting in severe flooding in many locations on Saturday, the second time this week.

The two-hour-long downpour caused congestion and inundation in various areas in the southern Vietnamese hub.

As observed by Tuoi Tre (Youth) newspaper reporters, sections of Le Van Viet Street in District 9 sank under 0.5 meters of rainwater, causing motorbikes to break down.

Learning from previous ‘experience,’ many motorcyclists caused chaos mounting their vehicles on the sidewalks to stop their engines from failing.

La Xuan Oai, Duong Dinh Hoi, and Do Xuan Hop Streets also fell victim to the deluge on the weekend, with a few sections submerged under nearly one meter of floodwater.

Commuters had to take shelter on the sidewalks as they waited for the rainwater to recede.

Such streets as Quoc Huong and Nguyen Van Huong in District 2 were also inundated, posing immense difficulty for locals and commuters.

Residents in many areas in the suburban district of Binh Chanh had a joyless weekend as they had to move their furniture and even pets to higher spots as rainwater gushed into their homes.

Several households in the district’s Binh Hung Commune were still seen struggling to pump or bail rainwater out of their homes at 8:00 pm.

“My entire house is flooded. We are confined to the upper floor and buy ready-made food as we can’t cook in the swamped kitchen,” Le Phuoc Hung, a local resident, lamented.

A torrential rain on Friday afternoon also left many streets seriously flooded, causing a lot of motorbikes to break down amid rainwater.

Leaders in District 9 showed up at severely flooded sections on Do Xuan Hop Street to instruct workers to open manhole lids and facilitate water flow.

They also convened a meeting with relevant agencies to work out measures to combat flooding the following morning.

A young woman and her brother are pictured struggling to push their bike through the raging currents. Photo: Tuoi Tre

Le Phuoc Hung’s family is confined to their first floor as the ground floor is inundated. Photo: Tuoi Tre

A man is pictured bailing rainwater out of his home. Photo: Tuoi Tre

A man is seen pumping out rainwater from his home. Photo: Tuoi Tre

Two dogs are confined to a desk in a dwelling in Binh Chanh District. Photo: Tuoi Tre

A young man makes do with a hasty dinner bought outside as his kitchen was flooded. Photo: Tuoi Tre

Many houses in Binh Hung Commune, Binh Chanh District were isolated during and after the downpour. Photo: Tuoi Tre