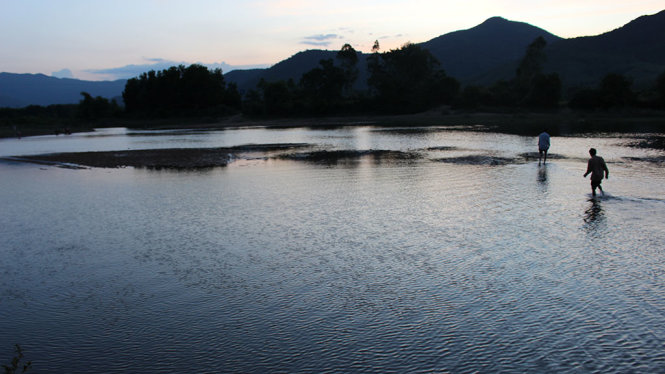 Eight people, including seven children and a sexagenarian, were reported drowning in two separate incidents in central Vietnam on Friday.

The first case took place in the south-central province of Binh Dinh, involving 68-year-old Van Tan Lanh and two of his grandchildren and their friend.

According to the police report, at around 10:00 am, Lanh asked his grandchildren, Nguyen Thi Phuong Thanh, 14, Nguyen Thi Tuyet Bang, 12, to join him in taking some cows to a nearby pier for the cattle to bath. The young girls’ friend, 8-year-old Tran Anh Tuan, also joined the journey.

At around 11:00 am, the old man’s neighbors swathe cattle returning home on their own.

They thus rushed to the pier searching for the four people and were devastated to find all four bodies of them in the Kut River.

Upon being briefed of the tragedy, Bui Van My, deputy chairman of the provincial Tay Son District administration, has visited families of the victims to pay his condolence.

According to the chairman, during this time of the year, the Kut River normally runs low, and local people often take their cattle to the river to bath.

Even though most of the riverbed is shallow, there are still some deep and dangerous areas, which may have drowned the victims, the chairman further explained.

People search for the victims in Kut River.

The second downhearted drowning case on Friday occurred at the C3 Lake in Ia Grai District in the Central Highlands’ Gia Lai Province, with four elementary students losing their lives.

The victims are fifth-grader Nguyen Le Hai Yen, six-year-old Do Ngoc Thuan, fourth-grader Nguyen Thi Hao, and third-grader Tong Thi Quynh Huong, who reportedly came to swim at the lake in the afternoon.

At around 5:30 pm, a local heard one of the victims crying for help and rushed to the scene, only to discover that the four children had drowned.

Police were immediately informed of the tragedy and managed to retrieve all four bodies after one hour, with the help of some local volunteers.

Local officials have paid a visit to families of the four victims and gave each of them VND5 million (US$220) to help with the funeral.

Drowning is one of the main causes of child death in Vietnam, with over 11,000 dead cases every year, according to WHO.

On April 15, nine sixth and eighth graders in the central province of Quang Ngai also drowned while swimming in a local river.