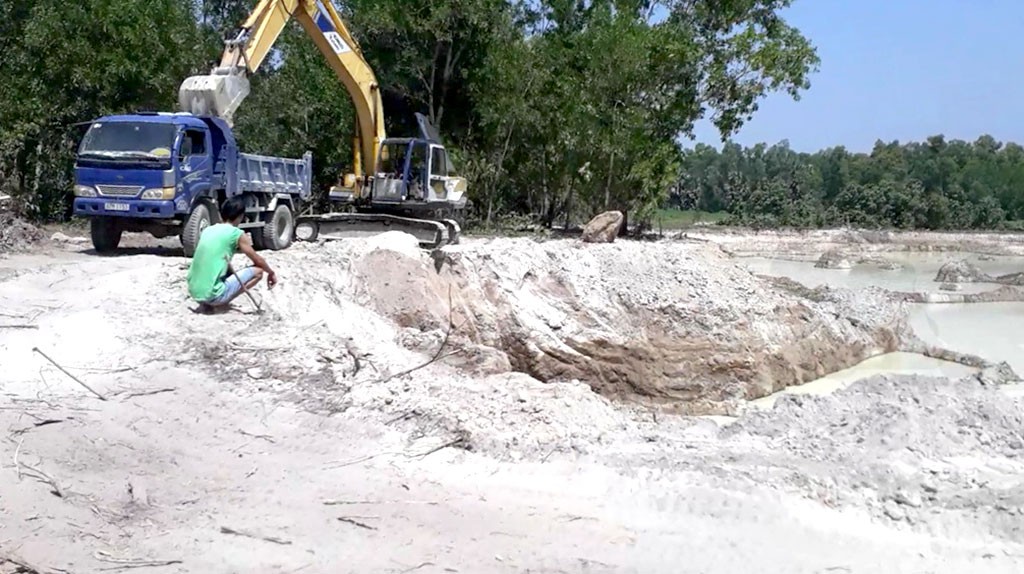 A mountain range in the southern Vietnamese province of An Giang is slowly being destroyed by illegal sand exploitation while local authorities claim the illicit operations are nearly impossible to stop.

Sand mining at Bay Nui (Seven Mountains), a range of small mountains in Tri Ton and Tinh Bien Districts, An Giang Province, is a 24/7 operation.

Four men at the bottom of the pit were using shovels to fill a nearby truck with sand bound for Ba Chuc Town in Tri Ton District.

The journalists observed a total of 10 illegal sand mines with a combined area of approximately 50,000 square meters scattered across the base of Ngoa Long Mountain.

Three additional mines stretching 25,000 square meters across and 10 meters deep were also spotted near the Ta Miet Pagoda. On-duty guards at the site were charged with notifying miners, trucks, and excavators working the sand mines to flee the area if strangers approached.

Dat, a local resident, stated that these sand mines had been in operation for three years, adding that dozens of trucks transport sand from the mines to construction sites in Tri Ton District each day.

A construction foreman in Tri Ton shared that most of the illegal sand mines in the locality are owned by two men named Do and Thon.

According to the foreman, Do is the former chairman of the People’s Committee in Le Tri Commune, Tri Ton District.

In nearby Tinh Bien District, the sand thieves make slightly more effort to conceal their operations by choosing to carry out the majority of their work after dark.

A Tuoi Tre probe uncovered that Nam X. is the man behind most of the unofficial sand mines and trucks wreaking havoc on Cam Mountain and Ngu Ho Mountain at Bay Nui.

At midnight on October 28, the reporters followed one of X.’s trucks to the foot of Ngu Ho Mountain.

Guard posts dotted the path leading to an unlawful sand mine were manned by hired security personnel and sniffer dogs.

By 2:00 am, the guards had begun their regular patrol.

When the canines detected the smell of strangers, the miners and vehicles were told to abandon the mine while the guards carried out a search for the ‘trespassers.’

The guards eventually found some of the Tuoi Tre journalists and immediately threatened them.

“What are you doing here? Is any of you left in the mountain? If we find anyone, we will beat them to death. Get out of here!” the thugs shouted at the reporters.

The correspondents caught by the guards were able to safely leave the site while members of the team investigating other locations on the mountain were forced to hide until the guards ended their shift at 5:00 am.

According to Nguyen Thanh Tung, vice-chairman of the Tinh Bien People’s Committee, the administration has issued no permits for sand exploitation in the locality.

“We will order the appropriate agencies to investigate and deal with the problem,” Tung declared.

Meanwhile, Phan Van Suong, chairman of the People’s Committee in Tri Ton District, said Thon and Do have been fined millions of dong (VND100 million = $4,410) for illegal sand exploitation.