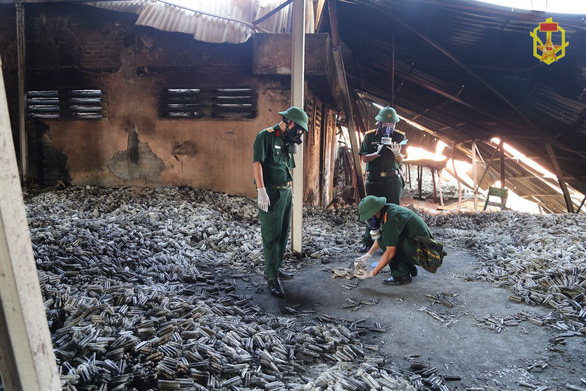 A light bulb manufacturer in Hanoi has been discovered lying about the mercury content of its fluorescent bulbs, giving rise to conflicting reports on health risks after an inferno destroyed the company’s warehouses last month.

The incident sparked concerns of mercury released into the environment and affecting nearby neighborhoods.

However, in a report submitted to the Thanh Xuan District administration two days after the fire, Rang Dong said it had replaced liquid mercury with amalgam - a mercury alloy - in the production of fluorescent light bulbs since 2016.

In addition, it claimed, Rang Dong-produced compact fluorescent lamps (CFL) are made from materials including polycarbonate, unleaded glass, aluminium, and wolfram, which are safe for human exposure.

The company added that a very small amount of amalgam, weighing just a few kilograms, was stored in its warehouses when the fire broke out.

A VEA report concludes that the fire at Rang Dong completely ravaged 480,000 fluorescent light bulbs, all of which contained an estimated amount of 20 milligrams of liquid mercury per bulb.

Most of the mercury was released into the environment together with smoke and other emissions, VEA said.

The blaze also destroyed 1.6 million CFLs, which contained one tablet of amalgam per lamp. Each amalgam tablet contains roughly 22-30 percent of mercury.

Over 4.5 million amalgam tablets - weighing 41.75 kilograms in total - as well as 108.9 kilograms of unused liquid mercury were stored inside the Rang Dong warehouses at the time of the fire, the environment administration found.

Nearly 35 kilograms of the liquid mercury and the entire amount of amalgam were safe as they were stored in a freezer.

Between 15.1 and 27.2 kilograms of liquid mercury is estimated to have been released into the environment, VEA concluded.

The environment administration said Rang Dong had admitted that all of the 480,000 destroyed fluorescent light bulbs contained mercury. However, the company has made no other public announcement regarding the mercury leak since its initial report.

While bulb production uses less amalgam than liquid mercury, both are a health risk if burned as the metal can vaporize under heat, causing symptoms including headache, dizziness, nausea, vomiting, numbness in the limbs, fever, shortness of breath, and chest tightness if inhaled, according to health experts consulted by Tuoi Tre (Youth) newspaper.

VEA has advised residents living in a 500-meter radius from the fire scene to cleanse their homes, refrain from drinking water stored in open-air tanks, and go to the hospital if symptoms of mercury poisoning occur.

Those living in a 200-meter radius from the burned Rang Dong warehouses should seek regular medical exams regardless of whether they notice any adverse health effects, it added.

Last week, Deputy Minister of Natural Resources and Environment Vo Tuan Nhan said at a government press conference in Hanoi mercury levels recorded in the air and surface water in some areas within a one-kilometer radius from the fire site were 10-30 times the safety limit set by the World Health Organization (WHO).

He was citing readings from monitoring stations installed across the capital city, adding that such levels are harmful to human health.