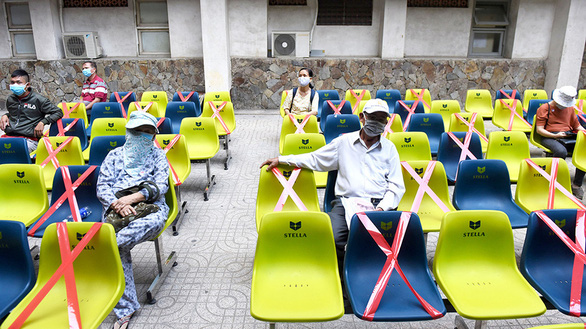 The Ho Chi Minh City administration has suggested that the central government prolong social distancing to the end of April to stem novel coronavirus disease (COVID-19).

The National Committee on COVID-19 Prevention and Control had solicited its local counterparts for their opinions on the implementation of the prime minister’s directive on social distancing measures to contain the virus spread, Nguyen Thanh Long, Deputy Minister of Health, said at a teleconference on Monday.

Thirty-two provinces and cities offered an answer, including two that proposed extending the social distancing period by one more week from April 15.

Ho Chi Minh City and seven other localities wanted the social distancing measures to be in place until the end of this month.

The other provinces and cities preferred praticing social distancing till the end of April 15.

“Ho Chi Minh City proposes that the prime minister extend social distancing until April 30 in the spirit of perseverance, proactiveness, and more determination in the implementation of the directive,” he said.

Vietnam started implementing nationwide social distancing on April 1, which is scheduled to last until April 15, according to Prime Minister's Directive 16.

People are asked to stay home and to only go out for essential reasons like food and medication purchase or emergency care. A two-meter distance is recommended to be maintained in social interaction.

Everyone is required to wear a face mask when outdoors, else they will be subject to a fine.

Stores and entertainment venues are now closed while restaurants are told to merely offer takeout and delivery.

Only essential services, specified by local authorities, are allowed to open during the social distancing period.

Both public transport and inter-province travel are restricted, with Hanoi and Ho Chi Minh City establishing checkpoints to screen entrants for illness symptoms.

Officials said at the teleconference that the country should continue strictly following social distancing guidelines, which seem to work as infection rates have become slower over the past week, with only several cases announced on a daily basis.

Anyone not wearing face masks in public will still be penalized, the National Committee on COVID-19 Prevention and Control said, underlining that it will crack down on non-essential stores that intentionally operate during the social distancing window.

The government may relax measures in low-risk localities while still enforcing them in places hard hit by the disease, the committee said.

The committee also suggested minimizing usage of cash to limit COVID-19 transmission, for people can contract the disease by touching surfaces contaminated with virus and then touching their faces.

Prime Minister Nguyen Xuan Phuc said that the government would decide whether to extend the nationwide social distancing period on Wednesday.

Three new COVID-19 cases were confirmed by the Ministry of Health on Monday evening, raising Vietnam’s tally to 265.

One hundred and forty-five have recovered while no virus-related death has been recorded in the country.

Doctors are expected to announce nine recoveries on Tuesday.