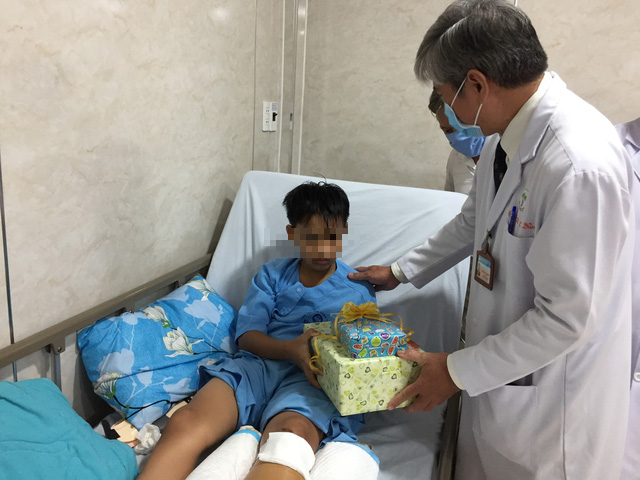 Only one out of 12 students injured by a falling tree at a Ho Chi Minh City middle school last week remained hospitalized on Monday, while one of the other discharged students is being treated for psychological trauma at home.

The remaining student is being treated at Children’s Hospital 2 in District 1 for multiple injuries including fractures in the right arm and pelvis.

He underwent a surgery a few days ago and is still in recovery at the infirmary.

He is among 13 sixth-graders at Bach Dang Middle School in District 3 who were hit by an uprooted Royal Poinciana tree on the school’s premises on the morning of May 26.

One victim succumbed to his wounds at An Sinh Hospital in Phu Nhuan District later the same day.

Eight of the twelve injured students were brought to Children’s Hospital 2, while the other four were admitted to the Ho Chi Minh City Hospital for Traumatology and Orthopaedics.

Shortly after they were admitted, four students were released from Children’s Hospital 2 as they only sustained minor injuries.

Two others were discharged on May 28 after being treated for soft-tissue wounds.

One of them was discharged on Monday morning.

Meanwhile, Dr. Nguyen Thanh Tam, director of the municipal Hospital for Traumatology and Orthopaedics, stated that the institution had released one student with minor scratches on May 26.

Among the other three students at the hospital, one suffered face and ear injuries and a dislocated collarbone; one had a broken left leg; and the other sustained shin fractures on both legs, a broken pelvis, neck fractures, along with a head injury, Dr. Tam elaborated.

All of them underwent surgeries on May 26 and were discharged on Monday.

One of the three still has trouble sleeping due to psychological trauma and is now being treated by a psychologist at home.

The three will be brought back to the infirmary for a follow-up next week, Dr. Tam continued, adding that their medical bills have been paid for by the hospital.