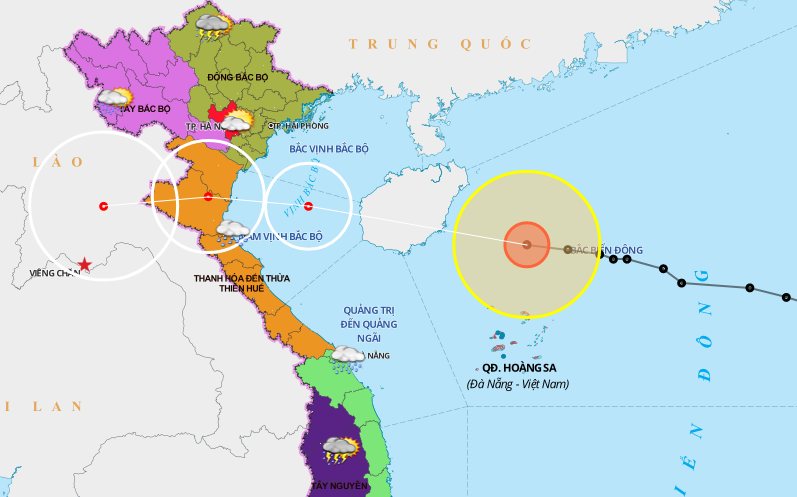 A tropical depression evolved on Monday into a tropical storm, named Storm Nangka, and is currently heading toward the Vietnamese mainland, bringing downpours to northern and north-central provinces over the next few days.

The storm, Vietnam’s seventh in 2020, was located 220 kilometers southeast of China as of 7:00 am on Tuesday, with wind speeds of 75-90km per hour and gusts up to 117km an hour, according to the National Center for Hydro-meteorological Forecasting.

It is expected to travel northwest in the next 24 hours and will be in the maritime area off the Gulf of Tonkin by 7:00 am on Wednesday.

Average wind speed will increase to between 75 and 100km per hour, while gusts will reach 133km an hour.

In the next 24 to 36 hours, Nangka is forecast to make landfall between the Red River Delta and north-central region, unleashing winds of 50-75km per hour, before weakening into a tropical depression.

Due to the storm and a cold front, medium to heavy rain is in the forecast in north-central provinces on Tuesday.

From October 14 to 16, downpours will increase in intensity and batter not only north-central provinces but also northern localities, with average rainfall estimated at 150-350 millimeters.

The national weather center also warned of high risks of flash floods and landslides in many areas between Quang Binh Province and central Quang Ngai Province.

The military has mobilized more than 8,570 people, 88 vehicles, and 172 boats to cope with Storm Nangka and any consequences caused by prolonged rain and flooding in central Vietnam.

As of 10:00 pm on Monday, torrential rain and floods had killed 28 people, while 12 others were still missing in central provinces, the Vietnam Government Portal reported.