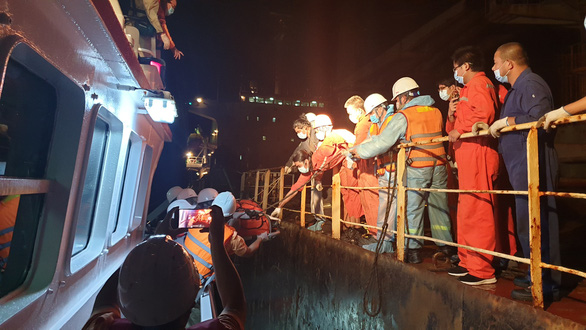 The VMRCC received a call for emergency rescue from the captain of JAIN HUI vessel of Panama, whose IMO (International Maritime Organization) number is 373886000, at 11:30 am on Tuesday while the ship was 45 nautical miles north-northeast of the beach city of Nha Trang in the south-central Vietnamese province of Khanh Hoa to take shelter from Storm Etau.

The JIAN HUI vessel was on its way carrying iron from Malaysia to China.

Its Chinese mechanic Wang Shihua, born in 1982, was seriously injured, unconscious, and bleeding given signs of brain hemorrhage.

As per the captain’s call for help, the VMRCC sent rescue ship SAR413 and an emergency medical team on duty at Nha Trang Wharf to the location of the Panama-flagged vessel.

Despite rough seas and bad weather due to the impacts of Storm Etau, the rescue ship quickly reached the JIAN HUI vessel, received the patient, and gave him first aid.

The Vietnamese rescue ship then promptly brought the injured crew member to Nha Trang Port and took him to Khanh Hoa General Hospital for treatment at 7:30 pm on the same day.