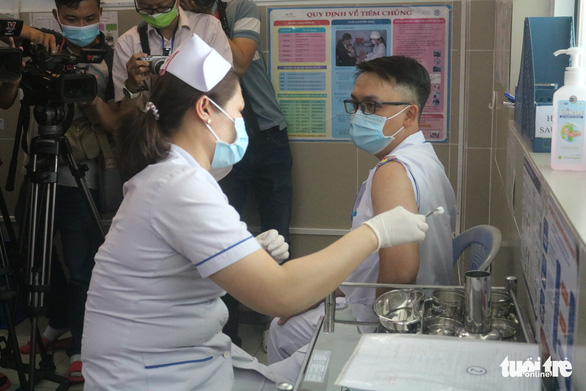 Number of people vaccinated against COVID-19 rises past 46,000 in Vietnam

More than 46,000 people have been inoculated against COVID-19 in Vietnam after over 1,200 were administered the first shot of AstraZeneca vaccine on Monday.

A combined 46,416 people have been given the first jab of AstraZeneca vaccine since Vietnam started vaccination on March 8, according to the program’s statistics.

Vietnam received the first-ever batch of 117,600 AstraZeneca shots on February 24. This is part of 30 million jabs it bought from AstraZeneca.

The UNICEF said on March 24 that the country would be provided with 811,200 doses of the same vaccine in the next three weeks.

The COVAX scheme, a facility co-led by the Coalition for Epidemic Preparedness Innovations (CEPI), Gavi, the World Health Organization (WHO), and UNICEF, to accelerate the development and manufacture of COVID-19 vaccines as well as ensure fair and equitable access for every country, will supply this batch for free.

“This quantity is smaller than previously announced for the first shipment and based on an equitable pro-rata distribution of available doses between all participant countries," the UNICEF said in a statement.

"Based on initial information shared by the manufacturer, the aim remains to deliver a total of 4,176,000 doses to Vietnam by the end of May, pending operational and supply constraints.”

Vietnam has approved two vaccines, AstraZeneca developed by the eponymous Anglo–Swedish company and Oxford University and Russia’s Sputnik V, for emergency use.

The Vietnamese government has said it already secured 60 million AstraZeneca jabs via direct purchases and the COVAX scheme.

It reported zero coronavirus infections on Tuesday morning, when the national caseload stood at 2,594 patients, including 1,603 domestically-transmitted cases, according to the Ministry of Health.

They have logged 2,308 recoveries and 35 virus-related fatalities so far.