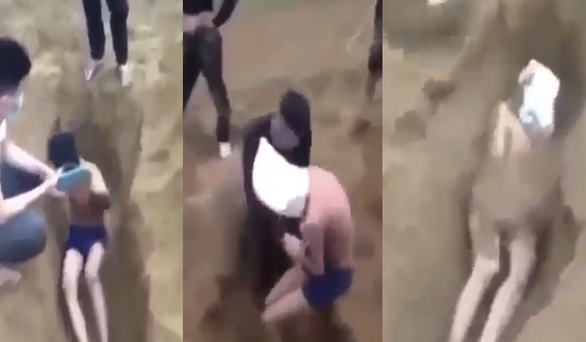 Police in Vinh City in Vietnam’s north-central Nghe An Province have arrested and started legal proceedings against nine men for trying to bury another man alive as the latter had failed to return a rented motorbike.

Five other underage boys were also involved in the case.

According to preliminary investigation, N.Q.V., 17, from Ha Tinh rented Duong’s motorbike but failed to return it.

Duong then asked the aforementioned men to look for V.

The group found V. in Vinh on March 24, undressing and assaulting him.

They then took the victim to a vacant land lot on the embankment along a local river in Ha Tinh and continued hitting him.

They also dug a hole, covered V.’s head with a sack, then pushed him into the hole and filled it up, whereas V. kept begging them to stop.

After a while, V. was pulled up and taken to the river to bathe there.

A video capturing the entire incident was then circulated on Facebook and caused quite a stir there.

Three hours after receiving a report on the case, police in Vinh City managed to arrest 13 members in the aforementioned gang and summoned V. to the police station.

The city’s police force went on to nab Duong while he was hiding in Hanoi.

The functional force is expanding their investigation to verify the claim that the gang captured V. at the request of his family to teach him a lesson for misbehaving.