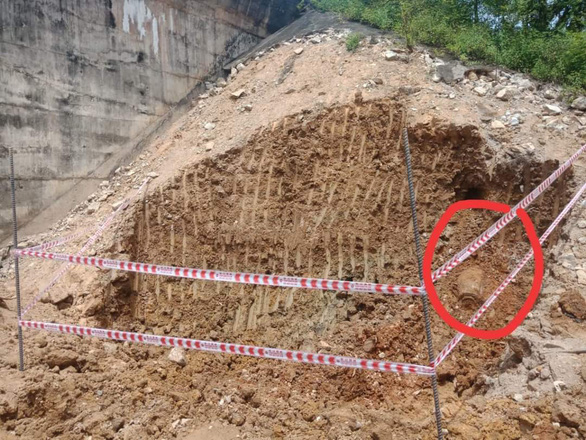 An unexploded bomb was found underground near the national rail in central Vietnam on Friday, resulting in the blockade of a railway section and thereby affecting many passenger and cargo trains.

A north-south railway section that runs through Quang Binh Province’s Tuyen Hoa District was blocked at 1:00 pm on Friday after the explosive item was found several meters away from the track, the Vietnam Railways Corporation (VRC) reported the same day.

Construction workers detected the bomb, left over from wartime, while they were working on a project upgrading the railway section, Nguyen Quoc Anh, deputy general director of VRC told Tuoi Tre (Youth) newspaper.

Following the detection, the railway route between Kim Lu and Dong Le stations was immediately blocked in waiting for the bomb handling, causing stoppage or delay of many trains.

Meanwhile, six cargo trains had to stay on at different stations in Ha Tinh and Quang Binh Provinces.

A military unit brought the bomb to the surface on Friday night and the explosive item would be moved away by a specialized vehicle, likely on Saturday morning, deputy general director Anh said.

The VRC had planned to hire coaches to transport more than 230 passengers from two trains SE7 and SE8 through the affected area to continue their journey on another train, he added.