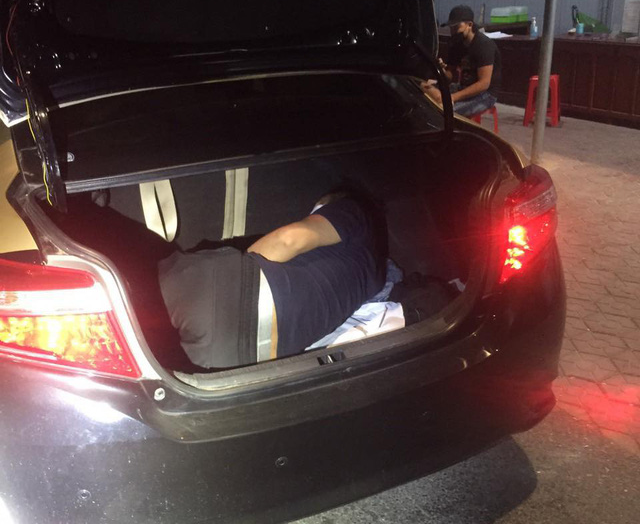 Police in the north-central province of Ha Tinh on Friday caught a Chinese man hiding in the trunk of a car on the way from the south to north of Vietnam despite travel restrictions.

Functional forces found the 33-year-old Chinese lying inside the trunk of the four-seater car numbered 18A-219.44 after pulling it over in Ky Anh Town, Ha Tinh at around 8:00 pm the same day.

As the Chinese failed to present his personal document at the police’s request, the car driver, 27-year-old Nguyen Ba Thuat, hailing from northern Nam Dinh Province, confessed that another person hired him to carry the foreigner from southern Dong Nai Province to northern Bac Ninh Province.

The payment, VND5 million (US$219.5), would only be made once the Chinese man arrives in the destination, Thuat said.

The driver asked the Chinese national to hide in the trunk to avoid inspection at COVID-19 checkpoints on their way.

Another passenger on the car is Dao Van Hieu, 28.

It appeared that the three men successfully dodged several checkpoints all the way from Dong Nai, which is currently under social distancing according to the prime minister's Directive No. 16, with inter-provincial travel restricted, before being stopped by Ha Tinh police.

Functional forces sent all of the three men to a centralized quarantine facility in Ky Anh Town according to regulations.

Thuat is subject to administrative sanctions for failing to comply with infectious disease prevention and control measures at the request of competent agencies.