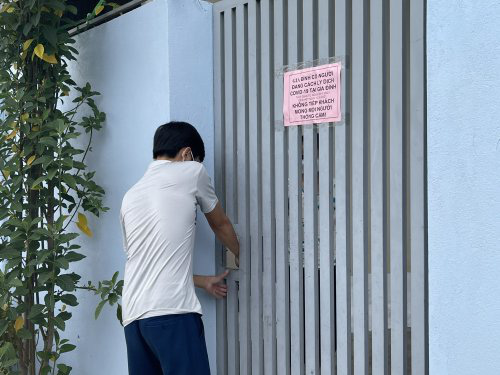 Authorities of a commune in the north-central Vietnamese province of Thanh Hoa have locked the doors of 278 houses with 388 people, who came into indirect contact with a COVID-19 patient, so that they cannot travel outdoors and spread the virus to the community.

Some residents of Hoang Thai Commune in Hoang Hoa District threw their support behind this approach, while others criticized it.

The 388 locked-up residents were direct contacts of 20 people, who had interacted in person with a coronavirus-infected employee working at Thanh Hoa Hospital for Lung Diseases.

The Hoang Thai People’s Committee decided to isolate all of them at home for 14 days following their negative COVID-19 test results.

Functional forces have even locked the doors of the 278 houses since Tuesday as there were not enough personnel to monitor every household around the clock, according to Trinh Huu Vui, chairman of Hoang Thai Commune.

Medical workers visit the households and check their health status on a daily basis.

This measure has come under fire as several people said that it is not prescribed in national COVID-19 prevention and control regulations.

“Locking the doors of those households will cause many conveniences if the family members with a serious illness, such as heart disease, high blood pressure, and diabetes complications, need to go to the hospital for emergency treatment, or in case of accidents such as an electrical short, fire, and explosion,” said a resident of Hoang Thai Commune.

In response to Tuoi Tre (Youth) newspaper’s queries regarding the issue, both chairman Vui and Le Xuan Thu, secretary of the Hoang Hoa District Party Committee, affirmed that the authorities had received approval from the 388 residents before locking up their houses.

The residents are expected to undergo their second COVID-19 tests on Friday, according to Thu.

“Once their results all return negative for the virus, the Hoang Hoa District authorities will ask the People’s Committee of Hoang Thai Commune to relax this quarantining method,” Thu said.

From April 27, when the fourth coronavirus wave struck Vietnam, Thanh Hoa has recorded 310 cases of COVID-19, including 122 recoveries and one death, according to VnExpress news site.

As the number of community outbreaks has bounced back recently, the provincial authorities have placed the two districts of Nong Cong and Nga Son and Thanh Hoa City under social distancing.