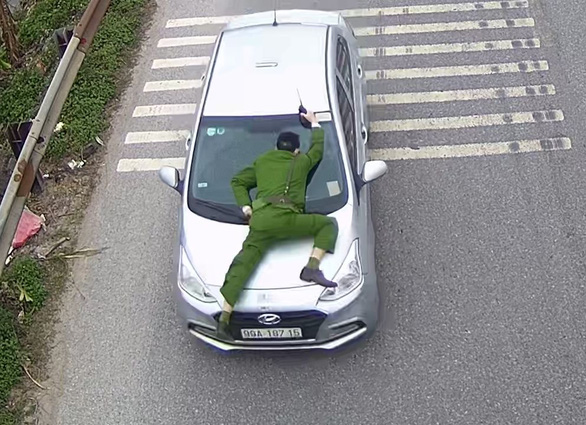 A car driver in Vietnam’s northern Bac Giang Province has been prosecuted for taking a traffic policeman for a three-kilometer ride on the hood of his car after the officer tried to stop him for speeding last month.

On February 26, a traffic police team was on duty on Provincial Road 295 in the district when they detected Quy speeding in his car.

A team member, H.N.H., approached the car and signaled Quy to pull his vehicle over.

Quy did not follow the police signal but revved up his engine and drove the car into H., forcing the officer who was standing right in front of the vehicle to jump onto its hood.

The driver kept accelerating with H. on the hood for around three kilometers and the district’s police had to deploy a specialized vehicle to block his way.

While Quy was slowing down the car and turning it before continuing to run away, H. jumped off the car safely.

At 10:00 pm on the same day, Quy turned himself in to local police.

Like in Quy’s case, as the police officer hopped off the cab after being taken for a several-kilometer ride, Huy escaped from the scene and showed up to police later.