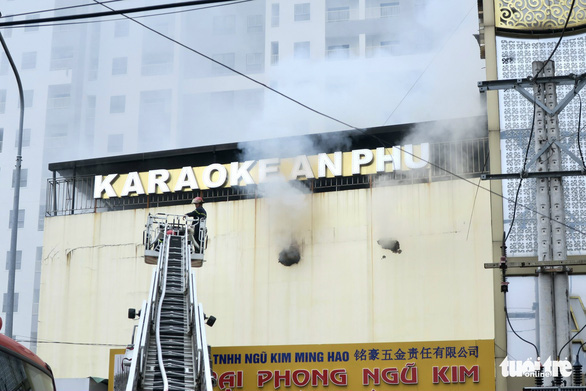 The Department of Public Security in Binh Duong Province, southern Vietnam has initiated its investigation into a fire that broke out at a local karaoke parlor and killed 32 people earlier this week.

Colonel Luu Minh Hoang, an official at the Binh Duong Department of Public Security, on Thursday signed a decision to investigate the violations of fire prevention and fighting regulations at An Phu karaoke parlor in Thuan An City.

An official at the provincial People’s Procuracy told Tuoi Tre (Youth) newspaper that the agency had received the decision and began conducting an examination of the scene of the incident.

Information released by police showed that An Phu karaoke parlor is a 500-square-meter venue consisting of three floors and 30 singing rooms.

The owner of the venue, which began operations in 2016, is 42-year-old Le Xuan Anh from Binh Duong Province. He currently resides in Thu Duc, Ho Chi Minh City.

The inferno started on the second floor of the facility at around 8:30 pm on Tuesday and quickly spread to other areas of the venue.

After being notified of the incident, nearly 70 officers and over 10 specialized vehicles were dispatched to the scene.

Twenty-two people were rescued from the flames while several others managed to escape on their own but were injured in the process.

Authorities in Binh Duong confirmed on Thursday afternoon that 32 people were killed in the fire.

Most news outlets previously reported that the death toll was 33 due to some confusion during the rescue process, according to a local official.

About 20 of the deceased victims have been identified, said Huynh Minh Chin, deputy director of the provincial Department of Health.

The identification process faces lots of difficulties as many of the bodies were badly burnt, Colonel Trinh Ngoc Quyen, director of the Binh Duong Department of Public Security, elaborated.