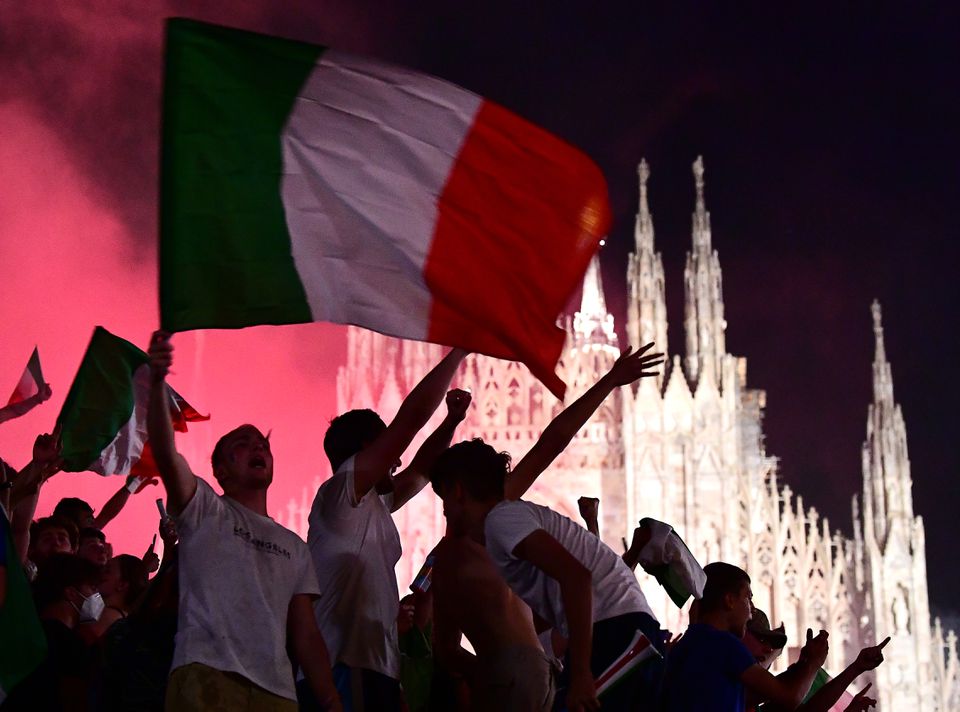 ROME -- Italians poured into streets and squares in massive numbers on Sunday as the national soccer team beat England to win Euro 2020, celebrating a success widely seen as a rebound from the heartbreak failure of not qualifying for the last World Cup.

Fireworks and music broke out across the country after the 3-2 shootout win, following a 1-1 draw after extra time, as flags waved and euphoric fans sang out in the hot summer night after the final played at London's Wembley stadium.

"It's incredible, it's incredible, you can't feel better than this, it is amazing, we won the final," said Stefano Gucci, a fan in the crowds at Piazza Del Popolo in Rome.

Italians praised national team coach Roberto Mancini for leading the country out of the depths of disappointment when they missed out on qualifying for the 2018 World Cup in Russia and for guiding them to their first Euro title since 1968.

"Great gratitude to Roberto Mancini and our players who have represented Italy well and have brought honour to sports," President of the Republic Sergio Mattarella said in a statement.

Joy erupted in cities from the north to the south of the country after the final save by Italy goalkeeper Gianluigi Donnarumma from Bukayo Saka. Fans filled the central Milan Duomo square and cars beeped their horns in Naples.

"It is very important for Italy, and especially for us," a fan in Jesi holding a giant Italian flag told SkyTg24.

It is the first major international success for Italian soccer since the 2006 World Cup victory. The 'Azzurri' have suffered repeated failures since then, including a crushing defeat against Spain at the Euro 2012 final.

"You have given us a magical night," said Italian Olympic Committee chief Giovanni Malago.

Italy, where people have suffered during the coronavirus crisis and the deep economic recession provoked by the curbs, has welcomed the success with hope and relief.

"It's like living in a dream you don't want to wake up from. Italy has woken up from the nightmare of the pandemic," said fan Gianluca Iannilli, 25, who is studying to be an interpreter in Rome.