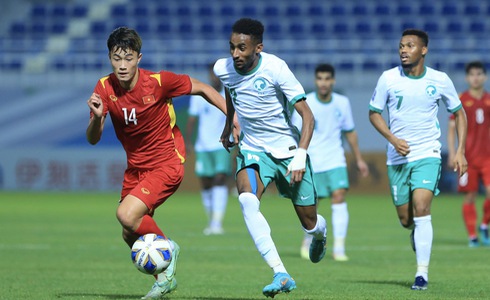 Vietnam’s run at the 2022 AFC U23 Asian Cup in Uzbekistan came to an end with a 0-2 loss to Saudi Arabia in the quarterfinal on Sunday night.

Both sides came into the tie aiming to win their maiden AFC U23 Asian Cup title with Vietnam having finished as runners-up in 2018, while Saudi Arabia came second in 2013 and 2020.

Vietnam surprised Saudi Arabia with their confident attacks in the first half.

In the 11th minute, Nham Manh Dung dribbled down the right flank and eliminated a Saudi defender, but his shot from a narrow angle lacked accuracy.

In another attempt, Manh Dung passed inside for Le Minh Binh, whose cross did not find anyone.

Vietnam were close to an opening goal in the 25th minute when Khuat Van Khang sprinted down the left flank and made a pass to Manh Dung.

While the Southeast Asian champions failed to convert several opportunities, Saudi Arabia took the lead in the 41st minute as Moteb Al Harbi raced down the left flank and finished into the far corner.

Vietnam pushed forward after the restart to find an equalizer, giving the Saudis more space to launch counter-attacks.

One of those phases saw Al Harbi cross inside for Firas Al Brikan, who headed it in for Saudi Arabia to double the lead in the 65th minute.

Vietnam’s hope to advance was completely dashed in the 78th minute when they were reduced to 10 men as goalkeeper Quan Van Chuan was given a red card and sent off after denying Al Brikan, who was through on goal.

Forward Nham Manh Dung had to play as the keeper for the rest of the game.

The scoreboard remained unchanged in the remainder as Vietnam exited the tournament with a 0-2 defeat to Saudi Arabia, who will clash with Australia in the semifinals.

The other fixture in the last-four round will be between hosts Uzbekistan and Japan.

Running from June 1 to 19, the 2022 AFC U23 Asian Cup is the fifth edition of the biennial international football championship organized by the Asian Football Confederation (AFC) for the under-23 national teams of Asia.