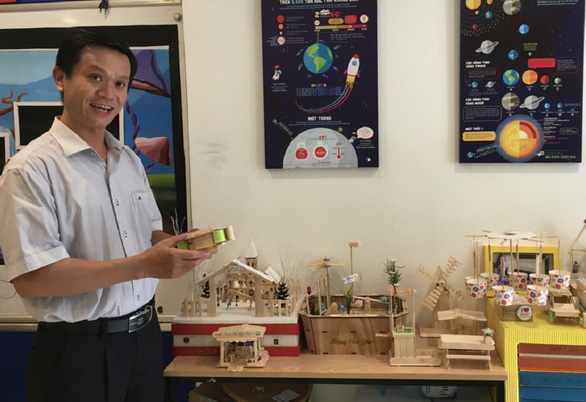 Nguyen The Loc, a 41-year-old father in Ho Chi Minh City, is building his daughter’s habit of making DIY toys to promote her creativity and decrease screen time.

Loc has spent the past year building hundreds of toys from recycled materials, each of which is designed in such a way that allows Loc and his daughter to practice essential life skills while creating the toys together.

“Playing with a kid reminds you of your own childhood,” Loc explained.

“Most adults don’t understand their own children. Playing with them is a great way to learn more about them.”

Loc makes spending time with his daughter a top priority.

Nearly every minute extra minute he has is spent designing toys with his daughter using materials the duo finds around their house.

Growing up in the Central Highlands province of Gia Lai, Loc had a challenging childhood.

Despite his poverty, however, he would not trade his days as a teenager for the world.

Even today, he fondly remembers exploring the nature surrounding his hometown and learning about the world organically.

Now, as a parent in modern society, Loc is trying to avoid the trap of too much work and too many responsibilities, which prevents many parents from spending time with their children.

Such an attitude has led to him and his eight-year-old spending countless hours creating toys from face masks, bottle caps, and cupcake wraps.

Loc’s DIY attitude to toys was inspired by a foreign TV show. He now tries to pass that inspiration along to his daughter.

One of Loc’s most prized creations is a picture he and his daughter made from tongue depressors.

“It took me and my daughter six hours to make. That’s six hours spent together not in front of a TV or smartphone.”

Not only does Loc enjoy the time his creations allow him to spend with his daughter, but he also appreciates the benefits of helping his daughter develop a creative and inquisitive mindset.

“A child always wants to brainstorm to find solutions during making a new toy,” said Loc.

According to Loc, she has become a do-it-yourself hobbyist like her father.

She is interested in making handicrafts and reading books. Most importantly, she no longer wants to watch TV or play with a smartphone.

Loc keeps some of his daughter's creations at home. Others he sends to his daughter’s teacher who awards several students each week with gifts for creating great handmade toys.

Creating a creative space for children

Loc hopes to share his story as a way of inspiring other parents to participate in similar activities with their children.

After graduating from the University of Economics Ho Chi Minh City, Loc worked as a teacher before becoming a financial manager for a business group in the city.

He and a friend launched a creative workshop meant for inspiring STEM education in Binh Thanh District, Ho Chi Minh City after resigning from the group.

STEM is a curriculum based on the idea of educating students in four specific disciplines, including science, technology, engineering, and mathematics.

In the creative space, children not only make toys by themselves but also design simple and complex models that can incorporate modern technology and coding.

At Loc’s STEM space, children are also able to learn and practice social and life skills.

“I teach them how to navigate using a digital compass in a park. This helps the children practice life skills,” says Loc.

“I also take them out to the street when giving them guidelines on transportation safety.”

He teaches the adults skills of dealing with drowning and offering first aid to people suffering a stroke.

He also holds trips on the weekends for children during which they pay visits to forests like Nam Cat Tien in Lam Dong Province and Ma Da in Dong Nai Province in order to learn in nature.

Loc dreams of having a piece of land large enough to build an experimental education center surrounded by nature.

He hopes to use the space for children to learn how to grow vegetables themselves and apply technical knowledge.

“I would like to create a workshop in which children, despite their age, can learn to do what is necessary for them to gain knowledge about creativity and technology,” he shared.