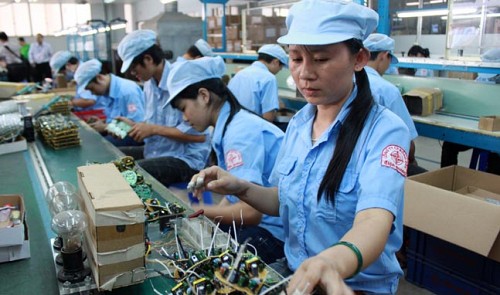 Informed that they would receive presents instead of cash as this year’s Tet bonus, all of the teachers at the Gia Lai-based Hoa Po Lang kindergarten expected great gifts, but what they actually received was beyond their imagination.

The teachers were each given a 3-liter bottle of cooking oil, a bottle of fish sauce, and 500g of watermelon seeds--a common snack during Tet—and a greeting card.

“But we were all happy to receive these thoughtful presents,” said Nguyen Thi Nam, a teacher at the school based in the mountainous commune of Gao in the Central Highlands province.

Dozens of millions of employees countrywide are anticipating the Tet bonus, which is usually cash awarded at the end of the year to help them celebrate Tet. But affording the bonus is a big headache of business owners and employers, especially during these hard economic times.

It is even tougher for schoolmasters, especially those in remote or mountainous areas, as the schools have no source of income beyond a modest annual budget from the government.

Chu Van Tien, principal of the Anh hung Wuu secondary school, also based in Gao commune, said his school has spent its budget as carefully as possible this year, but there is still not enough money to afford a cash bonus for the teachers.

Consequently, Tet gifts for the school staff are similar to those granted by Hoa Po Lang kindergarten, and cost only VND185,000 (US$8.73) each, Tien admitted.

At the Krong Pa boarding school, which only admits students of minor ethnicities in Gia Lai, the Tet present is unique.

Over the last few years, teachers there would receive a set of ten new bowls for Tet. Le Thi Uyen, chief of the school union, said the gift is “practical” and it is all the school’s modest budget can afford.

For manufacturers, the budget for Tet bonuses depends on the year’s business results. Thus, cash bonuses given by businesses vary widely.

Some textile and garment businesses said their Tet cash bonus will be 15 to 20 % higher than last year.

Meanwhile, Rang Dong Plastic said the average cash bonus for more than 700 of its employees is VND12 million ($566) per person, while the figure granted by Dien Quang, a bulb maker, is VND13 million per person.

With better business results in 2013 than 2012, many securities firms will also increase the cash bonus for their employees.

But it could be an unhappy Tet for real-estate employees as the property market still failed to post positive results this year.

Nguyen Van Duc, deputy director of Dat Lanh Real Estate, said the best his company could do is to give away bonuses worth less than one month of salary to the employees.

Nguyen Thi Anh Tuyet, salesperson of a well-known realty company based in Ho Chi Minh City, said managers at her company will receive only VND1 million for their Tet bonus, while new employees will get only a half of that sum.

But the most unfortunate are small businesses who incurred losses this year.

T.V.D., director of a business which trades agricultural products, said the company had to struggle to have enough money to pay its employees wages, let alone granting bonuses.

“We have tried our best,” he said, adding that the company is still hurt by unsettled debts from 2012.