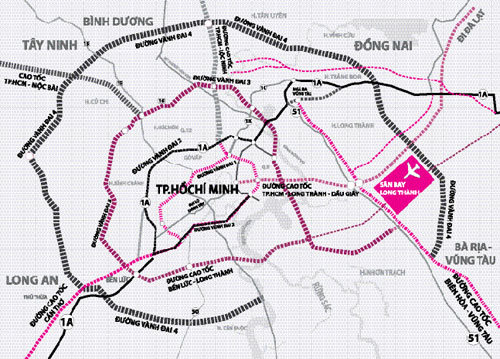 Lawmakers from Vietnam’s National Assembly Economic Committee have given majority support to a plan to build the multibillion-dollar Long Thanh International Airport, but they are concerned over where the money to fund the project will come from, the deputy head of the committee said Wednesday.

The committee raised the funding question at a meeting of the National Assembly Standing Committee in Hanoi, where Minister of Transport Dinh La Thang sold the costly airport plan.

The facility will be located in Long Thanh District – approximately 50km from Ho Chi Minh City – in the southern province of Dong Nai.

It is essential that the Long Thanh terminal be built to ease the burden on Ho Chi Minh City’s Tan Son Nhat airport, which will become overloaded soon, Thang argued.

“The establishment of Long Thanh International Airport is thus an urgent issue,” he concluded.

Economic Committee deputy chairman Nguyen Van Phuc said most of the committee lawmakers back the plan to build the new airport, but there are two points that need clarifying.

“The first issue is where we will get the money to build the airport,” Phuc said.

The project, to be funded by state capital and foreign loans, will require a total investment of US$7.83 billion just for its first phase, at a time when the state budget is facing problems and rising public debt, according to the official.

“The transport ministry’s report does not include a detailed funding plan for the project,” he said.

“The ministry says VND84.62 trillion ($3.98 billion) of the investment for the first phase will be provided through government bonds and official development assistance loans.

“The total investment for all three phases of the project will thus be enormous.”

The project requires the clearance of an area of 5,000 hectares, and the government will have to earmark VND20 trillion ($941.35 million) for compensation for households that have to relocate, which Phuc said will present further problems for the state coffers.

The objective and necessity of the project have also been questioned.

The official added that the problem can be solved merely by expanding the 1,500-hectare Tan Son Nhat terminal, as many airports in Southeast Asia are still able to handle large numbers of passengers despite their small areas.

During its first phase, ending by 2025, the 5,000-hectare Long Thanh terminal is expected to receive 25 million passengers and handle 1.2 million metric tons of goods a year, according to the transport ministry.

The Economic Committee also said the transport ministry failed to evaluate the competitiveness of Long Thanh compared to major existing terminals in the region, Phuc added.

These include Suvarnabhumi in Bangkok, Kuala Lumpur International Airport in Malaysia, and Changi, all of which have planned capacity of at least 100 million passengers a year.

The National Assembly will make a final decision on the Long Thanh airport project during its October sitting, slated to open on October 20.